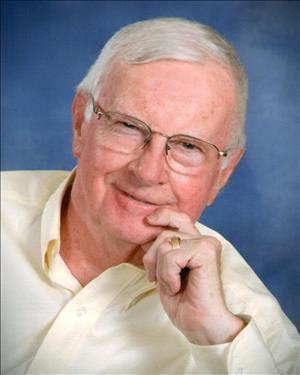 Richard "Dick" Paul Maves, 80, of Crookston MN, passed away, Friday July 3 2015, with family by his side at Riverview Hospital. Dick was born September 24, 1934 to Clarence and Margaret (Enright) Maves in East Grand Forks MN and graduated 1952 from Sacred Heart Catholic School. He attended NDSU, receiving his B.S. in Pharmacy. Dick married Delores Krom in 1959, and together raised three boys, Robert, Michael and Scott. He worked at the Olson Drug Store in EGF, then owned and operated Eagle Drug of Crookston for over 30 years. He was active in the Crookston community, where he was a proud member of the Lions Clubs, Eagles Club and American Legion. Also, a longtime member of the Knights of Columbus. His hobbies included playing golf, supporting UND sports, collecting coins, stamps and toy cars. He will be remembered for his generosity and loyalty to local charities. Richard is survived by his children, Robert (Isun) Maves of HI, Scott (Karla Anderson) Maves of Crookston; grandchildren, Charles (Amanda) Maves of MI, and Matthew Maves of Crookston; former wife, Delores Maves of Crookston. He is Preceded in death by his parents; son, Michael Maves; granddaughter, Cindy Sun Maves. Visitation will be 5-7PM Thursday July 16 at the Stenshoel-Houske Funeral Home of Crookston with prayer service at 7PM. Mass of Christian Burial will be 2PM Friday July 17 at the Cathedral of the Immaculate Conception in Crookston. Interment will be at Calvary Cemetery. One last round to celebrate Dick's life will be held Friday July 17 starting at 5PM at the Crookston Eagles Club. In lieu of flowers, please make a donation to any local charity in memory of Dick.

Visitation One hour prior to service

To order memorial trees or send flowers to the family in memory of Richard Maves, please visit our flower store.