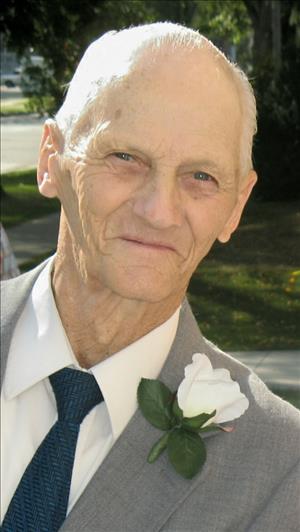 Raymond Louis Benoit, 92, of Gentilly MN died peacefully at Riverview Hospital in Crookston MN on Wednesday October 28, 2015, surrounded by his family. Mass of Christian Burial will be held on Monday, November 2 at St. Peter's Catholic Church in Gentilly MN at 11 am, with visitation an hour before the funeral and also on Sunday November 1 from 2-4 pm at Stenshoel-Houske Funeral home in Crookston, with a prayer service at 4 pm.

Raymond was born March 7, 1926 in Gentilly MN to Louis & Rose (Chouinard) Benoit. He was baptized and confirmed at St. Peter's Catholic Church in Gentilly. He spoke only French until he attended the Gentilly school. He graduated in 1941 from Crookston's Cathedral High School. Ray served in the U.S. Navy on the Destroyer USS Stack 406 in the South Pacific during WWII, where he learned the electrical trade and operated a photography shop. He was united in marriage to Florence Friederichs at St. Joseph's Catholic Church in Foxhome MN on June 21, 1950. They lived in his childhood home for the first 10 years of marriage, then he built a house where they raised 8 children. Ray was a journeyman electrician, and worked on many buildings in the Grand Forks/Crookston area, most notably the Chester Fritz Auditorium, Highland Middle School, St. Joseph's Provincial House, and the Grand Forks Air Force Base. He was a member of the Disabled American Veterans and the International Brotherhood of Electrical Workers, Local 1426. After he fully retired in 1976, he was busier than ever. In the spring and summer he could be found beekeeping, picking wild asparagus in the ditches, and keeping Gentilly township free of gophers, beavers, and goatsbeard weed. He was caretaker for St. Peter's Cemetery and Church in Gentilly. He spent years surveying the town of Gentilly and researching historical records of unmarked graves from the 1890's. Fall weekends were planned around local church dinners. He was proud that he could still wear his navy uniform every Veteran's Day. In winter, he would flood the Gentilly creek and swimming pool, and maintain rinks for hockey and ice skating. He enjoyed making wine and krumkake for family holiday gatherings. Ray looked forward to watching his grandchildren's events. He loved fixing things, especially old wind up clocks. He also worked on family genealogy, bowled and played cards with seniors. He reported bowling scores, rain amounts, and birthdays to KROX radio. Ray helped to organize reunions for his navy ship, which he and Florence traveled around the country to attend. They also enjoyed travels to Hawaii, Alaska, and other states. Grateful to have shared in Ray's life are Florence, his wife of 65 years; his eight children and their families: Diane (Paul) Gratton of Fargo: Jill, Carly. Kathy (Gary) Shulstad of Halstad: Gerry, Meg, Nick, Andy, Will. Nancy (Greg) Searle of Eagan: Jennifer, Michael. Jane (Ervin) Vigness of Nielsville: Rachel, Marie, Pete, Aaron, Rose, Jacob, Elizabeth. Brian (Laurie) Benoit of Crookston: Cheriese, Travis, Henry. Greg (Joyce) Benoit of Crookston: Jason, Lisa, Jeff. Neal (Beth) Benoit of Crookston: Katie, Jenna. Brenda (Mario) Ruberto of St. Michael: Britta, Dane, Seth; 40 great-grandchildren; and his

To order memorial trees or send flowers to the family in memory of Raymond Benoit, please visit our flower store.