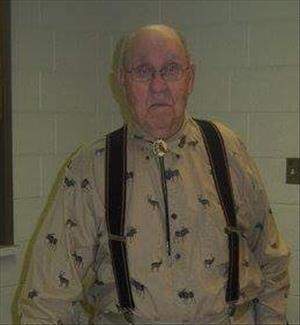 Ralph Jack Weiland, 95 of Euclid, MN died Friday, December 11, 2015 at Villa St. Vincent, Crookston. Funeral services will be at 1:30 p.m. Tuesday, December 15, 2015 in the Stenshoel-Houske Funeral and Cremation Service. Visitation will be one hour prior to the service. Burial will be in the Prairie View Cemetery near Euclid, MN. Ralph was born April 12, 1920 in Crookston, the son of Phillip & Harriet "Hattie" (Owens) Weiland. He attended school through the 8th grade. On October 11th 1942 Ralph was united in marriage to Helen Lucille Kuhn. The couple lived all there married life on the Weiland homestead in Euclid. Ralph was a hard working farmer, jack of all trades, always willing to help a neighbor, inventor and a jokester. Ralph and Helen enjoyed traveling which included, Alaska and Canada several times. They enjoyed square dancing. Ralph lost the love of his life, Helen on January 24th 1999. Ralph married Eva Mae Armstrong on March 23rd, 2000. Eva died August 3rd, 2004. Ralph's youngest son Michael moved in to live with Ralph in January 2010, so Ralph could continue to stay at his home. His granddaughter, Chelsea moved in later to help as well. Ralph leaves two daughters and sons-in-law, Diane & Bruce Berscheit of Waite Park, MN and Debbie and Russell Jobe of Ashby, MN; three sons and two daughters-in-law, Phillip and Linda Weiland of Pierpont, SD, Ronald and Vicky Weiland of Stephen, MN and Michael Weiland of Euclid, MN; 21 grandchildren and 25 great-grandchildren. Ralph was preceded in death by his parents; wives; two sons, Roger and Ralph Jr. and a granddaughter Lisa Weiland. To order memorial trees or send flowers to the family in memory of Ralph Weiland, please visit our flower store.