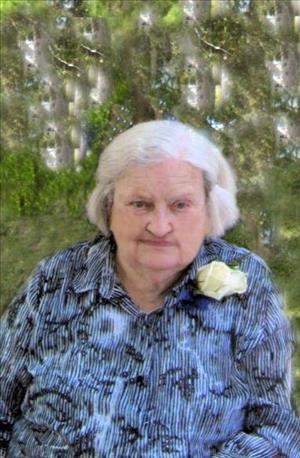 Pearl Clarise (Okeson) Goosen, 92, of Crookston died on Saturday evening, April 18, 2015, at the Villa St. Vincent in Crookston with her four children and other family members at her side. The funeral service for Pearl Goosen will be held at 2:00 p.m., Friday, April 24, 2015, at the Stenshoel-Houske Funeral Home in Crookston with the Rev. Jo Gast, officiating. Visitation will be for one hour prior to the service. Interment will be at St. Paul's Cemetery, rural Euclid, MN, later in the afternoon. Pearl was born October 22, 1922, in Battle Lake, MN to August and Tillie (Rosenquist) Okeson. She was baptized and confirmed in the Lutheran faith at Eagle Lake Lutheran Church. She attended country school for eight years at District 72 in Eagle Lake Township. Pearl graduated from Battle Lake High School in 1941. She moved to Davenport, IA from 1942 to 1944, working at Rock Island Arsenal in Rock Island, IL. She joined the U.S. Navy WAVES in November of 1944 and served in naval communications in Washington, D.C. until her honorable discharge in April of 1946. On August 5, 1950, she was united in marriage to Herman Carl Goosen at Eagle Lake Lutheran Church in rural Battle Lake. The couple made their home in Angus, MN where they farmed. In 1952, they moved to Crookston where Pearl worked at various restaurants. She enjoyed reading, embroidery and was an avid Scrabble player. Pearl is survived by her four children: Beverly (Thomas) Larson of Edina, MN, Sandra (Jan) Thimmesch of Eden Prairie, MN, Shirley (Peter Heydt) Nielsen of Crookston and Robert Goosen of Crookston; seven grandchildren: Angela Skrade, Marcia (Steven) Hagland, Joshua (Natalie) Nielsen, Brandon Nielsen, Jason Thimmesch, Jeremy Thimmesch and Sara Thimmesch; ten great-grandchildren: Damian, Ava, Mercedes, Quentyn, Haylee, Kevin, Riley, Cora, Piper and Katherine; one niece, JoAnn Lillevold, one nephew, Keith Lillevold and several cousins. She was preceded in death by her parents, her husband, Herman on October 4, 1968, a son, James Herman in 1951, a sister, Eunice Lillevold and two brothers, Ferris and Donald. Memorials are preferred to the St. Paul's Cemetery.

To order memorial trees or send flowers to the family in memory of Pearl Goosen, please visit our flower store.