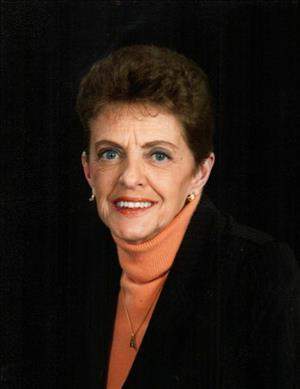 Pauline Ann "Polly" Strem, 76, of Crookston, MN, passed away Monday morning, January 16, 2017, at her home, with loving family members and friends at her side.

Polly was born to William and Anna (Swartz) Jensen at Fertile, MN on October 16, 1940. She grew up at Fertile, was baptized and confirmed at the Concordia Lutheran Church, and while attending Fertile High School was active in band, debate, and cheerleading before her graduation in 1958. Polly went on to attend the Bethesda School of Nursing in Crookston, earning her LPN Degree in 1959. That same year she was united in marriage to the love of life, Jean Lynn Strem, on September 26th at the Concordia Lutheran Church. In l960 Polly, Jean, and their first-born son, Jan, moved to South Milwaukee, WI where second son, Todd, was born. Polly was a nurse in the OB Department of Trinity Memorial Hospital there until the family returned to Fertile in 1964. She opened a dress shop in Fertile in 1965 and ran it until the family moved to Crookston in 1967. Polly then worked at the RiverView Hospital, and in 1975 welcomed the birth of their third son, Cory. Polly and Jean purchased the Irishman's Shanty in 1976 and operated it until 1980. Nursing remained her passion so Polly returned to the RiverView OB Department, later leaving to do clinical nursing at the Northwestern Clinic, today known as Altru Clinic. Sadly, Jean passed away on July 2, 2002, and several years later son, Jan, passed on November 23, 2009. Polly retired in 2010 after a long and rewarding career in nursing. She found joy in spending time with her family, and keeping up with her grandkids activities and taking great pride in their achievements. Shortly before her death Polly left a note for her family that read in part, "…have a big party and I will do the same with Dad and Jan."

Polly's memory will be forever treasured by her daughter-in-law, Leslie Strem of Rochester, IN; sons and daughters-in-law, Todd and Julie Strem of Crookston, MN and Cory and Courtney Strem of Solon Springs, WI; 8 grandchildren and a great-granddaughter: Jaron and Logan Strem of Indianapolis, IN, Cole Strem of Grand Forks, ND, Tye, Kenzie, and Macy Strem of Crookston, and Faye and Chloe Strem of Solon Springs; her precious great-granddaughter, Teaghan Strem of Crookston; aunt, Donna Jensen of Crookston; sister-in-law and brother-in-law, LaVonne and Alden Jallo of Fertile, MN; and other relatives and dear friends. In addition to her beloved husband, Jean, and son, Jan, Polly is preceded in death by her parents, William and Anna Jensen.

A memorial service celebrating the life of Pauline "Polly" Strem will be held at 2:00 p.m., Friday, January 20, 2017, at St. Paul's Lutheran Church in Crookston, MN with The Rev. Bill Reck, officiating. Visitation with the family will be for one hour prior to the funeral.

To order memorial trees or send flowers to the family in memory of Pauline Strem, please visit our flower store.