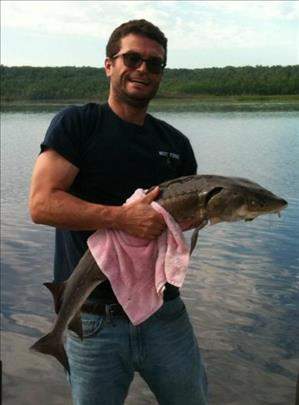 Paul Ray Damon, 37, of Lake Geneva, WI, passed away very unexpectedly on Saturday, July 16, 2016 in Lake Geneva. Paul was born on October 25, 1978 in Crookston, MN; the son of Pamela (Abrams) and Robert J. Damon. Paul grew up in Crookston, MN and attended Central High School. After high school, Paul worked at a group home in Crookston, MN. He was endearing and true to his clients. In 1999 Paul began working for New Flyer of America Inc. in Crookston, MN, doing axel installation. Also, during the same time, Paul worked for Schenck Construction. On May 1, 2001, Paul had the best day of his life; he became the father to his beautiful son, Owen, and had fallen in love with him at first sight. He loved being a dad more than anything in this world. Paul's pride and joy was his son. He would do anything and everything for him.

In 2002, Paul began working for Scot Forge in Spring Grove, IL. He started out at the bottom and had worked his way up to the title of Blacksmith. Paul was proud of this accomplishment. While at Scot Forge, he worked and led his crew on the 5500 ton press, which was impressive. Paul loved his job. He considered his co-workers family and had great respect for them. On July 12th, 2016, Scot Forge announced that Paul had won the Spike Award. The Spike Award is voted on once a year by all Scot Forge employees. Paul was honored and yet, remained humble stating "I just do my job." In addition to being a dad and spending quality time with Owen, Paul's favorite pastime was fishing. He loved to fish off the dock, the boat, and the ice. He could sit there for twelve hours and not catch a single fish, and it would still be a great day. Among many fishing spots, his favorites were the St. Louis River in Duluth, MN and Lake of the Woods in Baudette, MN. He loved being with his family and friends. He made many trips to Crookston just to visit them all. Paul enjoyed going to concerts and festivals too. In addition to fishing and music, Paul was a "loud and proud" Chicago Bears fan. His love of the Bears was even stronger when they played against the Minnesota Vikings. Paul was a genuine, humble, and honest person. He never sugar coated a thing, and said it how it was. He would give you the shirt off of his back if you needed it, even if it was the only shirt he had. He would stop and help strangers on the side of the road. He would go out of his way to make people smile. Paul could light up a room when he walked in. He was always full of positivity, encouragement and love. He lived life to the fullest and was a true inspiration to others. Paul was adored by his family and friends and will be forever remembered as a great man. Paul is survived by his son, Owen Damon of Lake Geneva, IL; mother, Pamela Damon of Crookston, MN; father, Robert (Joanie) Damon of Wonder Lake, IL; paternal grandfather, Randy Howe of Pierre, SD; brothers, Joshua (La Jeanna) Damon of Johnston, CO, Nathan (Taylor) Damon of Crookston, MN and Justin Damon of Wonder Lake, IL; and many other extended family and friends. Memorial Services will be held at the Stenshoel-Houske Funeral Home in Crookston, MN on Wednesday, July 27, 2016. Visitation at 11:00am-1:00pm followed by services at 1:00-2:00pm.

To order memorial trees or send flowers to the family in memory of Paul Damon, please visit our flower store.