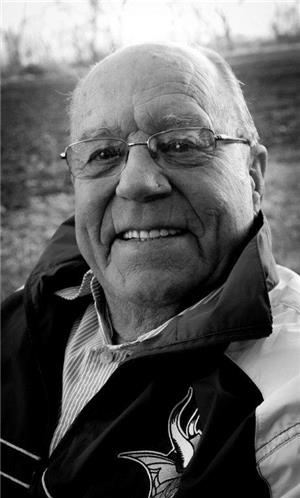 Paul E. Caillier, 89, of Crookston, MN, died unexpectedly Monday, March 30, 2015, at his home. Paul was born on October 11, 1925 at Gentilly, MN, one of thirteen children of the union of Edward and Maria (LaFramboise) Caillier. He grew up on the family farm, was baptized and confirmed at St. Peter's Catholic Church in Gentilly, and attended District 105 school in Gentilly Township. For several years Paul worked for farmers in the local area. He was united in marriage to Jeanette M. Perreault on May 13, 1947 at St. Joseph's Church in Red Lake Falls, MN. Soon after their marriage the couple moved to Boron, CA, with Paul's brothers, and he worked as a mechanic at a truck stop owned by his brother, Robert. Paul and Jeanette returned to Gentilly later and where he owned and operated a garage and blacksmith shop. He soon began farming with his brother, Steve, and later bought a farm of his own north of Gentilly, where he and Jeanette raised their twelve children. Paul worked winters at American Crystal Sugar as a boiler operator. During these years he was also a sales representative for the Pioneer Seed Company and Sigco Sunflowers, and as a result of his "top sales" he earned several awards, including trips to Hawaii, Jamaica, and Las Vegas. From 1968 until 1975 Paul was the local dealer for Chaparral Snowmobiles. Following his retirement from farming in 1985 he did custom combining and drove for Transystems Trucking Company. In 1995 Paul and Jeanette moved to Crookston. They enjoyed winters in Arizona. Over the years they were members of St. Peter's Church in Gentilly, St. Joseph's Church in Red Lake Falls, and the Cathedral of the Immaculate Conception in Crookston. He was a longtime member of the Cathedral Choir, singing for Masses and funerals. Sadly, Jeanette passed away on June 21, 2014.

Born to a life of farming, Paul never tired of watching the process of sowing the crops in the spring and harvesting them in the fall. Gardening was another of his passions, and he loved growing raspberries and vegetables and sharing his bounty with family. He was a very loving husband, father, grandfather, and great-grandfather, and one of his greatest joys was helping many of his 12 kids work on their homes. He was a friend to everyone he met and a loving father always focused on providing for his family. He possessed a spirit of great strength, and strove for excellence in all that he did. May God bless Paul's memory.

Grateful to have been part of Paul's life are his twelve children, their spouses, and families: Linda (Merle) Knott of Trego, WI, Marlan (Pam) Caillier of Monticello, MN, Nancy (Bob) Katzenberger of White Bear Lake, MN, Mac (Joyce) Caillier of Vadnais Heights, MN, Renae (Dennis) Donarski of Crookston, MN, Mike (Claire) Caillier of Crookston, MN, Dean (Cathy) Caillier of Davenport, ND, Joan Caillier (Charlie Egeberg) of Hastings, MN, Paula Caillier (Mike Tschida) of Minneapolis, MN, Curt (Laurie) Caillier of Crookston, Chad (Becky) Caillier of West Fargo, ND, and Terri (Kevin) Hearnen of New Hope, MN; thirty-eight grandchildren; and thirty-seven great-grandchildren. He also leaves four siblings: Josephine Boucher, and Steve (Betty) Caillier, of Crookston, Elayne Hannah of Mentor, MN, and Bonnie (Frank) Marra of Scottsdale, AZ; a brother-in-law, Leonard Perreault of Grand Rapids, MN; and many nieces, nephews, and other extended family. In addition to Jeanette, his beloved wife of sixty-seven years, Paul was preceded in death by his parents, Edward and Maria; four brothers: Bob, Jerry, Norman, and infant, Joseph; and four sisters: infants, Lorraine and Lucy, Annette Fournier, and Marion Plante. Mass of Christian Burial for Paul E. Caillier will be held at 2:00 p.m., Tuesday, April 7, 2015, at the Cathedral of the Immaculate Conception in Crookston, with the Rev. Vincent Miller, presiding. Visitation will be at the Cathedral on Monday from 5-7 pm, with a 7 pm prayer service, and also at the Church for one hour prior to the Funeral Mass. Burial will be at St. Peter's Cemetery, Gentilly.

To order memorial trees or send flowers to the family in memory of Paul Caillier, please visit our flower store.