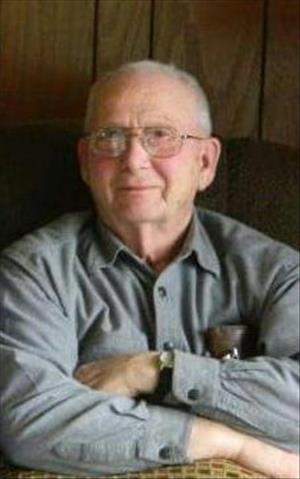 Noel Fred Rusling, age 83, of Crookston, Minnesota passed away on Thursday evening of August 6, 2015 at Riverview Hospital with his family by his side. He was born on March 26, 1932 to the late DeWitt Rusling and Gladys Isley Rusling in Stephen, Minnesota. During Noel's life he worked as a laborer on the railroad, as a newspaper printer and pressman and as a sign painter. In 1973 he opened his own business, Rusling Signs, which he ran until his last illness in 2015. His sign business began with paint brushes and oils and ended with computers, printers and cutters. Noel's artistic skills were excellent, but he was most proud of the fact that at his age, he had learned to make graphic images on a computer screen. Noel was an avid hunter and fisherman and on many autumn days you could find him out in the field with his dog and shotgun looking for pheasant or partridge. If not there, look on a lake, for if he wasn't hunting, he would be fishing both summer and winter. Noel is survived by his wife, Mary; sons Jeffrey Rusling of East Grand Forks, MN, Kelly Rusling of Grand Forks, ND and Jason (Marta) Rusling of Alliance, NE; daughters Nancy (Rick) Erickson and Susan (David) Chaffee of Crookston, MN; nine grandchildren, twelve great-grandchildren, one great-great-grandchild, sisters Marlene Buckley of Orangevale, CA and Karen Belser of Columbia, SC, several nieces and nephews and one devoted dog named Belle. Noel was preceded in death by his father, DeWitt Rusling, his mother, Gladys Isley Rusling Beebee, his brothers William Rusling and John Rusling. In keeping with Noel's wishes, no services will be held; he was cremated. Burial will take place at a later date at the convenience of the family. The family asks that any memorial gifts be given in Noel's name to the Polk County Humane Society or to the Riverview Health Foundation.

Assumption of the Blessed Virgin Mary

To order memorial trees or send flowers to the family in memory of Noel Rusling, please visit our flower store.