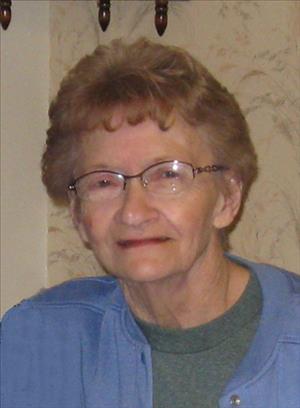 Nadine L. Miller, 83, of Crookston, MN, died Thursday afternoon, April 30, 2015, at the RiverView Care Center in Crookston with her family at her side. The funeral service for Nadine will be held at 7:00 p.m., Monday, May 4, 2015, at the Stenshoel-Houske Funeral Home in Crookston. Visitation will be for one hour prior to the service. A graveside service will be held at 1:00 p.m., Tuesday, May 5th, at the Devils Lake Cemetery in Devils Lake, ND. Refreshments will follow at the Fireside Inn, Devils Lake. Nadine Lola Miller was born on November 29, 1931 in Churchs Ferry, North Dakota, the daughter of Ewald and Martha (Schach) Henke. Nadine was baptized and confirmed at St. Paul's Lutheran Church in Penn, ND. She attended country school near her home, and later attended school in Penn, ND through the eighth grade. On March 4, 1952, Nadine married Earl W. Miller in Red Lake Falls, MN. Nadine and Earl lived in Churchs Ferry during their first few years of marriage while Earl was in the Air Force, and later in Devils Lake, where they were members of St. Peter's Lutheran Church. In 1957, the family moved to the rural St. Michael area, where they raised cattle and sheep, until their oldest daughter graduated in 1970. From 1970 – 1974, the family lived in New Rockford, ND, where Nadine worked at the airport upholstering aircraft seats and also stitched and covered airplane wings. Nadine and Earl were members of Emmanuel Lutheran Church. From 1974 – 1980, Nadine assisted Earl with duties at Fertile Aviation in Mentor, MN. In 1980, Nadine and Earl moved to Crookston, MN, where she and Earl ran Crookston Aviation, living in the house on the grounds of the airport. She was known for making a big lunch for her husband and workers every day and they came into the house to eat. In her spare time, Nadine enjoyed gardening and sewing. A caregiver at heart, Nadine took care of her wheelchair bound mother the last five years of her life and cared for Earl when he was dying of cancer. Survivors include her daughters, Patty (T.J.) Sabie, Embarrass, MN and Peggy (Jeff) Evenson, Mentor, MN; daughter-in-law, Mary Ann Miller, Mentor, MN; grandsons, Lowell Miller and his son, Michael, Crookston, MN; Wesley (Whitney) Miller, Fertile, MN; Justin Jetty, Philadelphia, PA; granddaughter, Ariel Jetty, Des Moines, IA; and a sister, Dorothy Kannas, Devils Lake, ND. She was preceded in death by her husband, Earl in 1991; son, Mike in 1992; and brother, Art in 1992; brothers-in-law, Lynn Nass, Carl Kannas, Gayl Miller and Kenny Miller; sister-in-law, Geri Nixon; and nephew/godchild, Jerry Nass in 2014. Online registry: www.stenshoelhouske.com

To order memorial trees or send flowers to the family in memory of Nadine Miller, please visit our flower store.