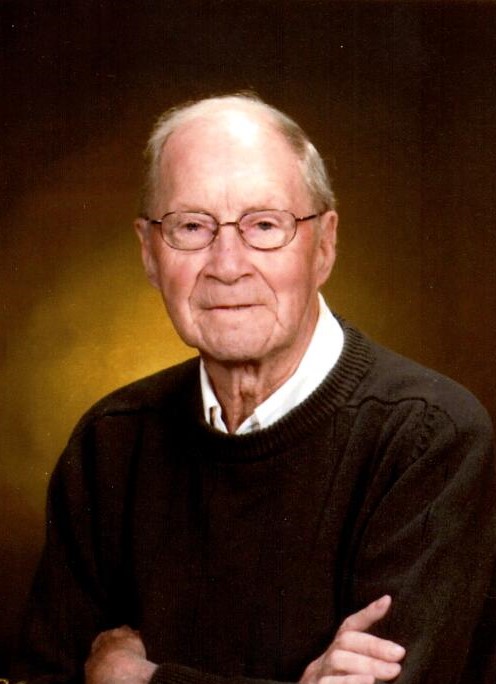 Morrie was born on his parents’ farm in Fairfax Township on April 7, 1926, the son of Lawrence and Anne (Carlson) Hovelsrud. He was baptized and confirmed at the Trinity Lutheran Church in Crookston and received the earliest years of his education at nearby Country School 123. He then attended Franklin Elementary School in Crookston through the 6th grade, ultimately graduating from Central High School as a member of the Class of 1944. After high school he began delivering Standard Oil products throughout the area. On June 2, 1948 Morrie was united in marriage to Twyla Aurora Julianna Hanson in Crookston. After living in Crookston for 2 years they moved to Fairfax Township. While moving a few more times over the years, they always remained within the Township limits. Together, Morrie and Twyla raised their three children: Cheryl, Pam, and David in a very loving home. He operated Morrie’s Standard Service Station in Crookston until 1967, when he became the Transportation Manager for the Crookston Public Schools. Morrie held this position for over 22 years before retiring in 1989. He was called back to work later and continued to drive part-time until his second retirement in 2011, at the tender age of 85. It would be safe to say that during his career he more than likely drove well over 400,000 miles.

In addition to being a lifelong member of Trinity Lutheran Church, Morrie had been an active member of the Jaycees as a young man. He enjoyed playing solitaire and loved to tell all who would listen how he once dealt himself a perfect hand which was quite a feat. He and Twyla enjoyed playing whist with their Fairfax neighbors and friends for many years. Morrie’s other interests were many and varied, including hunting, listening to the radio, working around the yard, lending a hand where help was needed, and being inventive in his shop, which is where he came up with his “great ideas” for do-it-yourself projects. He will be fondly remembered for his sharp wit, fairness, warmth, kindness, humility, easy-going fun-loving nature, respectfulness, understanding, and compassion. Morrie was at his best and happiest when spending time with Twyla and family, and was especially proud of the character and accomplishments of their kids and extended families.

A memorial service celebrating the life of Morrie Hovelsrud will be held at Trinity Lutheran Church in Crookston at 2:00pm, Monday, August 20, 2018, with The Rev. Elise Pokel, officiating. Visitation with the family will be for one hour prior to the service. Inurnment will take place in the Oakdale Cemetery, Crookston. Memorials may be given in Morrie's name to Trinity Point, c/o Trinity Lutheran Church, 205 S. Broadway, Crookston, MN 56716.

To order memorial trees or send flowers to the family in memory of Morris Hovelsrud, please visit our flower store.