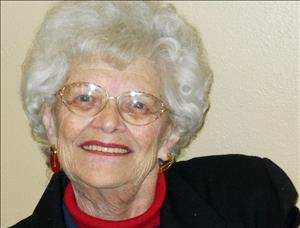 Mertle Emily Scully, 81, of Fertile, Minnesota passed away Friday, December 4, 2015 at Fair Meadow Nursing Home in Fertile MN surrounded by her loving family. Funeral Mass will be said at 10:30 a.m. Friday, December 11, 2015 at St. Peter's Catholic Church in Gentilly, Minnesota. Visitation will be Thursday evening from 5 to 7 p.m. at the Stenshoel-Houske Funeral and Cremation Service in Crookston with a prayer service beginning at 7 p.m. Visitation will continue on Friday one hour prior to the Mass. Burial will be in St. Peter's Catholic Cemetery, Gentilly, Minnesota. Mertle Emily Sterger was born June 2, 1934 at Fisher, MN the daughter of Henry and Johanna (Butenhoff) Sterger. She attended Crookston Central High School and was a member of St. Peter's Catholic Church in Gentilly. She was united in marriage to Roy Scully May 20, 1958 in Dubuque, Iowa. The couple made their home in rural Gentilly and in 1966 moved into the home that Roy built in Gentilly. She was a homemaker and mother. Later they moved to Fertile MN where she worked many years at Mac's Café. She was a very talented seamstress and made many dresses, she also enjoyed crocheting, making blankets and playing cards. Mertle loved her children and spent much time with them and her extended family. She taught "all" of her family that blood is not what made them all family, it was the time spent together that bonded them and made sure that each one received a crocheted blanket from her. Her quick wit and ability to make everyone smile and laugh was what made her "Grandma". She is greatly missed by everyone whose life she touched. Family surviving include her children, Danny (Karin) Duquette, Karen (John) Lawson, Kathryn Swenson, Korene (Steve) Maynard, Dale (Roxanne) Scully; son in law Keith Swenson; 22 grandchildren; 34 great-grandchildren and three great-great-grandchildren; sisters, Linda Sterger and Ann Montoya: and very close friends, Dale and Carol Mackowick and Ron and Dawn Jackson. She was preceded in death by her parents; husband, Roy; brothers, Harold, Ed and Jerry Sterger; a sister in law, Edna Sterger; her sister, Irene Green and brother in law, Elmer Green; a son, Duane and twin great-grandsons. To order memorial trees or send flowers to the family in memory of Mertle Scully, please visit our flower store.