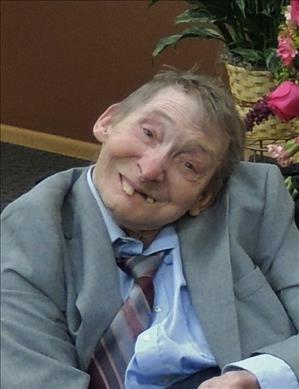 Melvin Lyle Amundson, 80, of Crookston, MN, passed away peacefully Friday afternoon, February 17, 2017, at the Villa St. Vincent in Crookston. Melvin had become a resident of the Villa in early December and was valiantly struggling to overcome recent health problems that had resulted in two separate surgeries. It was his hope to return to his home until learning recently it would not be possible.

Melvin was born on his parents' farm near Mentor, MN on December 7, 1936, the only child of Herb and Ella (Skalet) Amundson. He was soon diagnosed as having cerebral palsy. His mother home-schooled him because his disability prevented him from attending school in those days. In 1954 Melvin studied the bible and was baptized as one of the Jehovah's Witnesses in Maple Lake. In 1972 the family moved to Crookston, where he continued his schooling and training at the Development Achievement Center, known as the DAC. In 1974 he received his GED through the Crookston Central High School. Through an interest he developed in ham radio, Melvin earned his general class license as an amateur radio operator. Later, through the Handi-Ham program of Camp Courage at Maple Lake, MN or Lake George, MN, he achieved the rating of Extra Class, the highest level of licensing in amateur radio. Worlds that he might have been denied, were it not for his driving ambition, were opened to him and through the years he developed friendships over the radio waves and met many fellow operators personally.

Despite his lifelong affliction, Melvin proudly lived independently in his home with some assistance from home health aides. For nearly 30 years he worked as a clerk at the Occupational Development Center (ODC) in Crookston. His congregation, Kingdom Hall of Jehovah's Witnesses, and amateur radio, were his life and his passions. His computer made many things possible for him, and he taught himself programs that controlled various different functions of his home. His deep and abiding faith, can-do attitude, vitality, and spirit, were an inspiration to so many who were a part of his life.

Melvin considered his fellow members of the Kingdom Hall in Crookston, and amateur radio operators from near and far, as his family. He was preceded in death by his parents, Herb and Ella Amundson.

A memorial service for Melvin Amundson will be held at 2:00 p.m., Wednesday, February 22, 2017, at the Kingdom Hall of Jehovah's Witnesses, 1727 Widman Lane in Crookston, MN, with Scott Boyer, speaking. Visitation will be for one hour prior to the service. Inurnment will be in the Faith Lutheran Cemetery, Mentor, MN, in the spring. The Stenshoel-Houske Funeral Home is assisting with arrangements.

To order memorial trees or send flowers to the family in memory of Melvin Amundson, please visit our flower store.