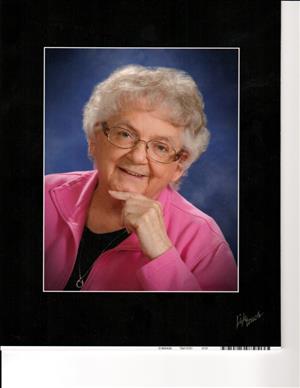 Marlys LaVonne Andringa, 81, of Crookston, MN, passed away peacefully in her home with family by her side on Sunday, June 26, 2016. Marlys was born September 13, 1934 to Rudy and Ellen (Eklund) Fetting in Ada, MN. Growing up she enjoyed showing Guernsey cattle in 4H and was very proud of her accomplishments at the Minnesota State Fair. Marlys graduated from Ada High School in 1952. On January 25, 1969 Marlys was united in marriage to Jess Andringa in Crookston, MN. A son, Michael, was born to their union. Marlys was very proud that she worked for the Farm Service Agency office for 36 years. She was a devoted wife, mother, and grandmother. She enjoyed spending time with her grandchildren and was very proud of all of them. She was also a very kind, caring, and generous friend to many. Marlys enjoyed crocheting, crafts, cooking, knitting, and watching hockey, but had a passion for quilting. She was a committed member of Wesley United Methodist Church, where she enjoyed the company of her church family who held a very special place in her heart. She will be sadly and lovingly missed by all who were a part of her life. Marlys is survived by her children, Donald (JoAnn) Andringa, Cynthia Ross, and Michael (Jeanie) Andringa; grandsons, Joel (Rachel) Andringa, Dana Andringa, Adam Ross, John Andringa, and Lukas Andringa; in-laws, Vernon Rage, Louis Andringa, Emma Wermager, Jennie Andringa, and Doris Andringa; and several nieces and nephews. She is preceded in death by her husband, Jess; her parents, Rudy and Ellen; sisters, Elmyra Hoven and Cheryl Rage and by several brothers and sisters-in-law.

To order memorial trees or send flowers to the family in memory of Marlys Andringa, please visit our flower store.