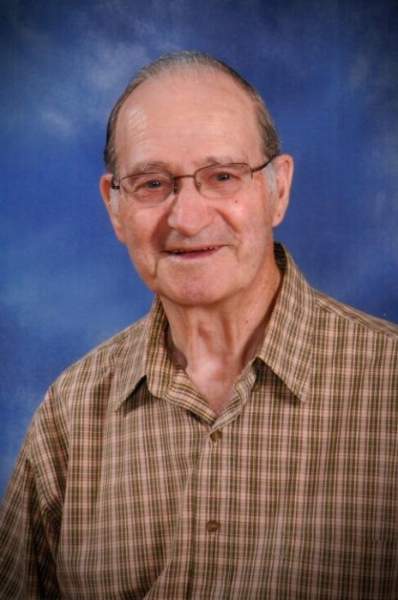 Marlyn Henry Raymond, 86, of Warren, MN, and a former longtime Crookston, MN resident, passed away early Tuesday morning, September 4, 2018, at the Altru Hospital in Grand Forks with members of his loving family at his side.

Marlyn was born in Fosston, MN on June 27, 1932, one of 11 children of the union of Emil and Beatrice (Fathergill) Raymond. At the age of 4 he moved with his family to Mentor, MN, and two years later to Crookston, where he attended the Cathedral School. In 1948 Marlyn began working for the Sanitary Dairy in Crookston. He enlisted in the Minnesota National Guard in 1949. Marlyn was united in marriage to Cecilia Lucille Desrosier on June 21, 1950 at St. Peter’s Catholic Church in Gentilly. He was called to active duty with the US Army on January 15, 1951 and served stateside at Camp Ricker, AL in support of the Korean War efforts. Sis was able to join him there for most of his tour and the couple returned to Crookston after his honorable discharge on September 14, 1952. Marlyn resumed employment with Sanitary Dairy until 1956 when he began working for the Minnesota Department of Transportation (MnDOT). After 38 years of dedicated service Marlyn retired in 1994.

In retirement he and Sis maintained a busy schedule, volunteering for the Sisters of St. Benedict and doing Home Delivered Meals. Marlyn was a lifelong member of the Cathedral of the Immaculate Conception parish, and active in the Golden Link Senior Citizens Center. In March of 1999 Sis and Marlyn were honored as Crookston’s Experienced Americans during a reception held at the Link. Marlyn also held membership in Crookston Eagles Aerie 873 for nearly 60 years. Every Saturday evening Sis and her fellow Eagles Auxiliary members would put on suppers at the club, and Marlyn would be there to pour coffee while visiting with everyone. Entertainment usually followed and he and Sis loved to show off their moves while dancing the night away with friends. Marlyn loved to go deer hunting with his family, and looked forward to making visits to the Shooting Star Casino in Mahnomen. His most unusual passion had to be his love of shoveling snow, and literally manicuring the snow banks. Who does that….Marlyn! After almost every Sunday Mass he and Sis would make their weekly stop at McDonald’s, or as Marlyn liked to call the restaurant, “Mickey Doodles.” If riblet sandwiches were on the menu so much the better. Marlyn was devoted to his family, especially his beloved wife and best friend, Sis, and to the 7 children who blessed their lives together. He was immensely proud of their grandchildren, great-grandchildren, and great-great granddaughter. He was always showing off his coin collection to them and they in turn were tickled every time he brought the state coins out for them to marvel at and learn about.

Marlyn’s memory will be forever treasured by Sis; their 7 children and spouses: Connie and Dan Erdman of Crookston, MN, Ken and Anita Raymond of Astoria, OR, Veronica and Larry Hasbrouck of Orlando, FL, Mike and Karen Raymond of Crookston, Renee and Craig Caillier of Thief River Falls, MN, Nate and Nicole Raymond of Fargo, ND, and Stacy and Marlin Brule of Jordan, MN; 21 grandchildren; 32 great-grandchildren; a great-great granddaughter; and many nieces, nephews, other relatives, and friends. As the last surviving member of his family Marlyn was preceded in death by 10 brothers and sisters, including Ernest, Lawrence, Robert, Stanley, and Daril Raymond, Ione Kneip, Irene Berry, Lola Williamson, Grace Chappuis, and an infant brother.

Mass of Christian Burial for Marlyn Raymond will be celebrated at the Cathedral of the Immaculate Conception in Crookston at 2:00 pm, Wednesday, September 12, 2018, with The Very Rev. Vincent Miller, presiding. Visitation will be at the Stenshoel-Houske Funeral Home on Tuesday from 5-7:00 pm, with a 7:00 prayer service and time of sharing, and will continue at the church for one hour prior to the funeral. Interment will follow at the Calvary Cemetery in Crookston with Military Honors provided by the Crookston Veterans Council and the MN National Guard Honors Unit from Moorhead, MN.

To order memorial trees or send flowers to the family in memory of Marlyn Raymond, please visit our flower store.