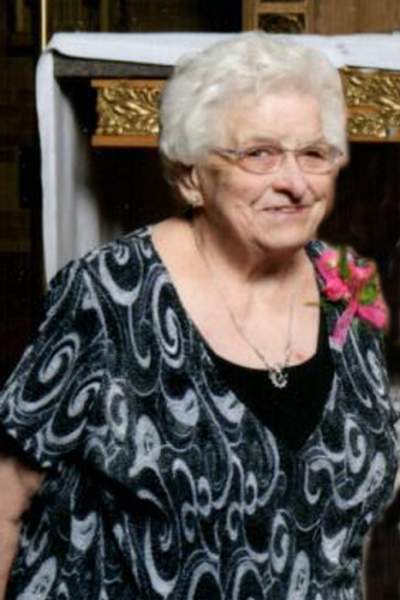 Marilyn May Newton, age 84, of Crookston, MN, passed away with her loving family by her side, on December 22, 2018 at Altru Hospital in Grand Forks, ND.

Marilyn was born on May 19, 1934 in Thief River Falls, MN to John and Anna (Pahlen) Schmitz. She graduated 8th grade from St. Joseph’s Catholic school and then attended Lafayette High School in Red Lake Falls.

On August 27, 1955, Marilyn married Philip Roy Cuno at St. Joseph’s Catholic Church in Red Lake Falls, MN. They first lived on the iron range, where Nancy was born, before moving back to Red Lake Falls, where Teresa and Tom were born.  Philip passed away 40 years ago on December 17, 1978.

On January 12, 1985, Marilyn married Ralph Landman Newton.  A short time after Ralph’s death in 1995, Marilyn moved in with her son Tom and his family, finally settling in Euclid, MN.

Marilyn enjoyed working with the senior citizens every Wednesday afternoon at the city hall.  She also worked for the city of Red Lake Falls as a custodian. She then did housekeeping for various people and businesses in Red Lake Falls.

Marilyn will be remembered as a devoted and loving mother, grandmother, and great-grandmother.  She was also an excellent baker and homemaker.

To order memorial trees or send flowers to the family in memory of Marilyn Newton, please visit our flower store.