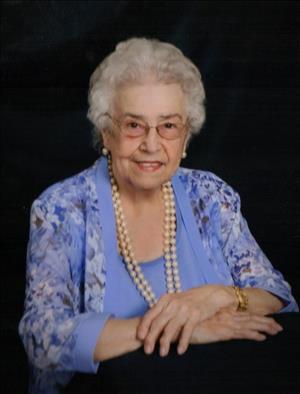 Margaret Bjorgo, 93, of Crookston, MN, passed away peacefully at Altru Hospital in Grand Forks, ND, on Friday, December 9, 2016, with members of her family at her bedside. Margaret was born at Monterrey, Mexico on February 19, 1923, the daughter of Jesus and Maria Martinez. She was baptized and confirmed in the Catholic faith and grew up in a loving home along with her brothers and sisters. Margaret later moved to Tampico, Mexico and became a registered nurse. During her working career she was employed at a Tampico hospital with the Red Cross, while also working as a triage nurse with Green Cross. She was later employed in a local dental office. Margaret met a young man, Lloyd Bjorgo from Crookston, who was on a fishing trip to the region. Margaret and Lloyd were united in marriage on February 21, 1954 at Tampico. They made their home in rural Crookston, and spent their first year living with Lloyd's parents, Ole and Stella, before moving into their new home. Margaret became fluent in English, both speaking and reading, under the tutelage of her mother-in-law and good friend, Stella. Together, Margaret and Lloyd raised 6 children. She was a loving and caring wife, mother, and grandmother; a great cook; and the best of nurses to them all when they were under the weather. Margaret taught her children some of the finer points of cooking, and made sure they got to school and religion classes. She was a very devout Catholic, and faithful member of the Cathedral of the Immaculate Conception parish throughout her life. Margaret and Lloyd loved to travel, and made many trips with the children as they were growing up, including several to Mexico. She loved working in her vegetable garden and tending her flower beds of prized roses, peonies, and geraniums. Sadly, Lloyd passed away on September 29, 1983. Margaret was a very strong and independent person and continued to live on the farm for several years before moving to the Summerfield Apartments in Crookston. On August 2, 2010 she became a resident of the Summit Apartments of Villa St. Vincent. Margaret will be very lovingly remembered and sadly missed by her 6 children: Joseph (Elvira) Bjorgo of Moorhead, MN, Patty (Dan) Anderson of Edina, MN, Edward (Sharol) Bjorgo of Lake Stevens, WA, and Albert (Patty and her son, Terry) Bjorgo, John (Darcy) Bjorgo, and Harold (Dawn) Bjorgo, all of Crookston, MN; 8 grandchildren: Abby (Jacob), Jenny, Tyler, Taren, Barry, Stephanie, Matthew, and Harrison; 7 great-grandchildren: Brett, Kasey, Ava, Cecilia, TJ, Taylor, and Dylon; as well as, other relatives and friends. In addition to her beloved husband, Lloyd, Margaret was preceded in death by her parents, and all of her siblings. Blessed be the memory of Margaret Bjorgo. Mass of Christian Burial for Margaret will be held at 11:30 a.m., Saturday, December 17, 2016, at the Cathedral of the Immaculate Conception in Crookston, MN with The Rev. Vincent Miller, presiding. Visitation will be at the Stenshoel-Houske Funeral Home on Friday from 5-7:00 p.m., with a 7:00 p.m. prayer service, and at the church for one hour prior to the Mass. Interment will be in Calvary Cemetery, Crookston, in the spring. www.stenshoelhouske.com

11:30 AM
Cathedral of the Immaculate Conception

Visitation for one hour prior to the Mass.

To order memorial trees or send flowers to the family in memory of Margaret Bjorgo, please visit our flower store.