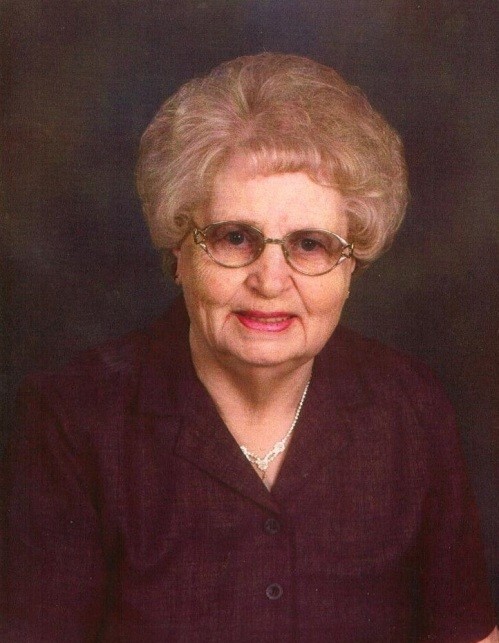 MaE was born on May 2, 1926 in Crookston, one of 5 children of Emil Carl and Elsie Bertha (Schroeder) Johnson. She was baptized and confirmed at Our Savior’s Lutheran Church and graduated from Fisher High School with the Class of 1946. On August 26, 1946 she married Ralph Bergquist. To their union a daughter, Diana, and son, Duane, were born. Duane passed away as an infant. In 1956 MaE began working as a telephone operator for Northwestern Bell in Crookston.  She moved to Lodi, California in 1965 and married Arthur Huber on December 24, 1965 at Reno, NV. Over the next several years the couple lived in Lodi before moving to the Minnesota communities of Wadena, Moorhead, Frazee, and Hoffman. MaE and Art then moved to Twin Falls, ID, where they spent several years before settling in Crookston in 1997. Art passed away on October 19, 2017.

MaE was a longtime member of Our Savior’s Lutheran Church and the Ladies Aid. She joined St. Paul’s Lutheran Church on October 30, 2005, and liked spending time with the St. Paul’s Quilters She also held membership in the RiverView Hospital Auxiliary and knitted many baby caps for the newborns. MaE enjoyed doing crafts including hardanger, which adorns the altars at Our Savior’s and St. Paul’s, and also tatting, crocheting, quilting, and sewing in general. MaE collected recipe books, was a lover of dogs, liked to go to garage sales, and thought that “to go boxes” to take home left-overs from meals she had enjoyed were just the greatest thing.

Family members include her daughter, Diana Thompson and husband, Daryl, of Crookston, MN; 2 granddaughters, JoElle Boucher and husband, Michael, and Amy Theis and husband, Michael, all of Crookston; 4 great-grandchildren: Harrison and Callie Boucher, and Jared and Gretchen Theis; 2 brothers and a sister-in-law, Marlan Johnson, and Stan and Betty Johnson of Crookston; as well as, nieces, nephews, and other relatives; and a special caregiver, Marilyn Flateland of Crookston. She was preceded in death by husband, Arthur; her parents, Emil and Elsie Johnson; infant son, Duane Allen; sister, Mildred Edmunds; a brother and 2 sisters-in-law, Howard and Verna Johnson, and Connie Johnson; and a niece, Carla Johnson. May God bless MaE’s memory.

The funeral service for MaE Huber will be held at the St. Paul’s Lutheran Church in Crookston at 11:00 a.m., Thursday, February 21, 2019, with The Rev. Greg Isaacson, officiating. Visitation will be at the church for one hour prior to the funeral. Interment will take place at Oakdale Cemetery, Crookston, in the spring.

To order memorial trees or send flowers to the family in memory of MaE Huber, please visit our flower store.