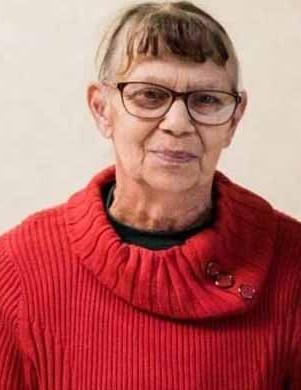 Lynette Marion “Pud” Joseph, 68, of Crookston, MN, passed away early Wednesday afternoon, April 1, 2020, at the Sanford Medical Center in Fargo, ND after a brief illness. She was greatly comforted by family at her side.

Pud was born on July 20, 1951 at Waukon, IA, the third of four children of the union of Orrin S. and Esther M. (Jasper) Halvorson. She was baptized and confirmed in the Lutheran faith, educated in Crookston schools, and graduated from Central High School with the Class of 1969. Pud then attended the Wahpeton (ND) State School of Science where she enrolled in the nursing program. On December 12, 1970 she was united in marriage to Michael “Mike” Joseph at the Hafslo Lutheran Church near Crookston. Their marriage would be blessed by the births of daughter, Kelli, and son, Kevin. Pud earned her associate degree as an LPN in the spring of 1971 and immediately began working in Crookston’s Riverview Hospital Inpatient Unit. Several years later she attended the Thief River Falls Technical Institute pursuing her ultimate goal of becoming a Registered Nurse. Pud was rewarded for all her hard work by graduating as an RN in 1983 and returning to the Inpatient Unit in her new role. From March, 1997 to January, 2002 she served as Supervisor of the ICU before returning to Inpatient Care. For several years she was also an instructor for RiverView’s Heart Classes. Pud was dedicated to her profession and the countless numbers of patients she so compassionately cared for. She loved her RiverView family and represented them very well as Employee of the Month in June of 1983. Pud was also a two-time recipient of the ‘Exceptional People Exceptional Care’ award, given based on feedback from patients. After a long and rewarding career spanning over 49 years she retired on September 24, 2019.

In March of 2017 Pud accompanied her granddaughter, Jasmin, as a chaperone during Moorhead (MN) High School’s orchestra visit to Hawaii. She felt so honored that Jasmin wanted her to be a part of this special trip. The itinerary included going to site of the Pearl Harbor Memorial and seeing the USS Arizona. It was an incredibly emotional day and one that Pud, even with tears running down her cheeks, recalled as one of her best days ever.

Pud’s greatest joy was her chosen career and successfully meeting the challenges she continually faced every day. During the quiet of most evenings she liked to relax and recharge by reading. Pud was devoted to her grandchildren and so very proud of each of them and their many accomplishments. She was especially thrilled to be able to welcome two great-grandchildren to her family in the last few years.

Pud will be remembered with great affection by her daughter, Kelli Joseph of Moorhead, MN; son, Kevin Joseph of Crookston, MN; 4 living grandchildren: Chelsey Homme of Crookston, Jasmin Joseph (Kaleb Arndt) of Hendrum, MN, Jeffrey Joseph (Paige Gieseke) of Moorhead, and Kenzie Joseph of Moorhead; 2 great-grandchildren, Ryder Joseph-Arndt and Waylen Arndt; a brother, Larry Halvorson of Crookston; 2 sisters, Lonna Newman of Crookston and Lisa (Ted) Schneider of St. Michael, MN; a niece, Jen (Robert) Daffern of Cambridge, MN; and many friends. She was preceded in death by her parents, Orrin and Esther Halvorson; a granddaughter, Kory Joseph, who passed on February 11, 2009; and a nephew, Glenn Newman. May Pud’s memory be forever treasured.

A Memorial Service celebrating the life of Lynette “Pud” Joseph will be held at 10:00 a.m. Saturday, August 7, 2021, in the Trinity Lutheran Church in Crookston with The Rev. Corey Lang, officiating. Visitation with the family will be for one hour prior to the service.  The service will also be livestreamed by logging on to Lynette’s obituary page at  www.stenshoelhouske.com and at the bottom of the page clicking on the prompt to view. Please enter Trinity from the parking lot entrance, the South Broadway door will remain locked.

To order memorial trees or send flowers to the family in memory of Lynette Joseph, please visit our flower store.