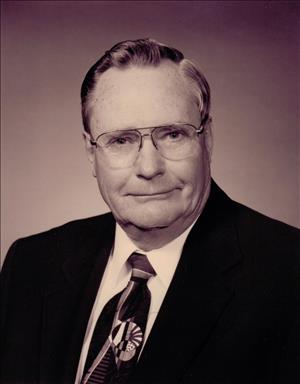 Lyle Harland Eisert, age 85, of Crookston, MN, died at Riverview Hospital, Sunday, October 25, 2015 with his loving family by his side. Funeral services will be at 2:00 p.m. Thursday, October 29, 2015 at Trinity Lutheran Church in Crookston. Visitation will be on Wednesday evening from 5-7 p.m. at the Stenshoel-Houske Funeral Home in Crookston with a Masonic Service beginning at 6:30 and prayer service at 7 p.m. Burial will be in the Oakdale Cemetery in Crookston.

Lyle was born July 21st, 1930 in Crookston, MN, son of Walter and Alma (Fredricks) Eisert. Lyle was baptized and confirmed at Trinity Lutheran Church. He graduated from Crookston Central High School in 1949. Lyle enlisted in the National Guard his junior year, was activated during the Korean Conflict and was honorably discharged as a 1st Lt. in 1966. In 1954, Lyle married Iris Mandt of McIntosh, MN, and they had 3 children, Kimberly, Todd and Kristi.

Lyle was a Crookston Police Officer for 4 years, Polk County Chief Deputy Sheriff for 25 years and Emergency Service Director for 14 years. He coordinated the implementation of the Polk County 911 system. Lyle was elected Polk County Commissioner, District 3 for 12 years. In addition, he served on numerous committees. He retired in January 2001. Lyle served on the Trinity Lutheran Church council, several committees and volunteered as a Boy Scout Leader for Troop 41. He held the position of Polk County Law Enforcement Association President; State of MN Emergency Managers President (he was the 1st President from Northwestern MN); Crookston Kiwanis President, America Legion Commander; Master of the Crookston Masonic Lodge; Outstanding Athletic Booster of the Year; Outstanding Elected Official of the State of Minnesota presented by the State of MN of Emergency Managers; and Outstanding Law Enforcement by Crookston Jaycees.

To order memorial trees or send flowers to the family in memory of Lyle Eisert, please visit our flower store.