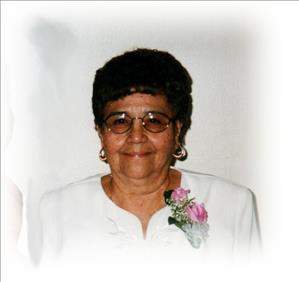 Luisa Yanez, age 94, of Crookston, Minnesota passed away on February 15, 2016. Luisa was born on June 21, 1921 in Olivia, Texas to Eligio and Teofla Rodriguez. She was raised in Palacios, Texas, where she attended school. Luisa married Fabian M. Yanez on August 9, 1941, and to this union there were six children. They raised their family in Corpus Christi, Texas, and then moved to Nielsville, Minnesota in 1959, where Fabian worked for a farmer for a number of years. In 1965 they purchased the Eidsmoe Café, which became Fabian's Café. They ran the restaurant together until Fabian's retirement in 1991. Luisa enjoyed working with her flowers outside and spending time with her grandchildren. Luisa is preceded in death by her husband, Fabian; sons, Jesse and Robert; and daughter, Hope DeLa Garza. She is survived by daughters, Anita Gayton of Crookston, Minnesota and Dora Yanez of Tacoma, Washington; son, Fabian (Sandra) Yanez of Campbell, Minnesota; and many loving grandchildren and great-grandchildren. Luisa will be missed by many family and friends. Funeral services will be at 11am Saturday, February 20, 2016 in the Stenshoel-Houske Funeral & Cremation Service, Crookston. Visitation will begin an hour prior to services. Burial will be in the Calvary Cemetery in Crookston.

Visitation one hour prior to service.

To order memorial trees or send flowers to the family in memory of Luisa Yanez, please visit our flower store.