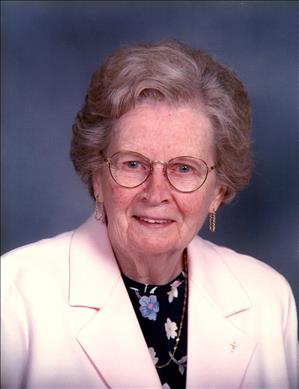 Lorna was born May 27, 1920 in rural Strandquist, MN and was the youngest of four children of Peter and Aggie Hougard. Lorna spent her childhood on the family farm outside of Strandquist where she also graduated from Strandquist Consolidated High School. She then moved to Minneapolis, MN and attended the Vocational School of Nursing where she graduated in 1942. Lorna was united in marriage to her high-school sweetheart, Russell W. Johnson, on April 4, 1942 in Yuma, AZ. Russell was inducted into the Army Air Force and served in the Korean Conflict for three years. Lorna returned to Minneapolis for a short time before moving back to Strandquist where she was employed at 1st National Bank as a cashier. When Russell was discharged in 1945, they established their home in Stephen until 1953 when they moved to Crookston, MN where their three children grew up. Lorna remained a homemaker in addition to selling Avon and sewing for many others. In the early 60's she did alterations for Town & Country, a ladies apparel store, before changing employment 1965 to a full-time bookkeeper and retail clerk at Erickson Electric. In 1978 the family was shocked by the sudden passing of her husband, Russell. Lorna would continue to work at Erickson Electric until she retired in 1982. Following retirement Lorna then began traveling where she met Albert Peterson, her loving companion and together they both continued to travel and visit friends and family.

In her spare time Lorna loved to sew and bake as well as go camping with family. She was also a member of the Trinity Lutheran Church where she taught Sunday school, helped in the kitchen and served in the Alter Guild for 8 years. During that time she also made confirmation stoles and baptismal towels. Lorna was also a lifetime member of the V.F.W. Auxiliary. Lorna is survived by her two sons, Ken (Debra) Johnson of Prescott Valley, AZ and Gene (Barbra) Johnson of Crookston and one daughter Connie Jedrzejewski of Irvine, CA. Also surviving are her six grandchildren: Kristopher, Benjamin, Joe, Meghan, Jennifer and Jason along with 6 great grandchildren. Family members who have preceded Lorna in death include her husband Russell, parents Peter and Aggie, sisters Irene and Fern (Percy), brother Raymond (Emphrie), sister-in-law Leona , son in-law David and loving companion, Albert Peterson. A memorial service for Lorna will be held at 2:00 pm on Saturday, July 15, 2017 at Trinity Lutheran Church with Pastor Gregory Isaacson presiding. Visitation with the family will be held one hour prior to the service with burial to follow at Oakdale Cemetery in Crookston. The family would also like to thank the Villa staff and Hospice for their special care.

To order memorial trees or send flowers to the family in memory of Lorna Johnson, please visit our flower store.