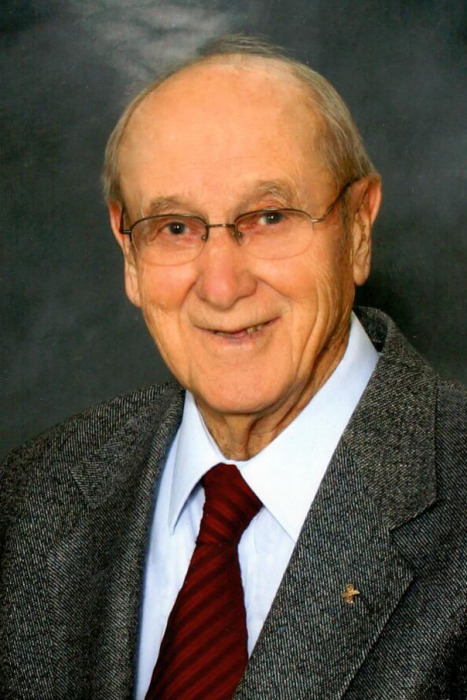 Funeral services will be held Tuesday, July 17th at 10:30 am at Trinity Lutheran Church in Fisher, MN with Pastor Steve Bohler officiating. Visitation will be Monday, July 16th from 5 to 7 pm at Stenshoel-Houske Funeral Home in Crookston, with a prayer service scheduled at 7 pm. Visitation time will continue one hour prior to the service at the church.  Burial will take place in Oakdale cemetery in Crookston.

Lloyd Erwin Wagner, 100, of Fisher, MN died in his home, surrounded by his loving family, on July 10, 2018. He was born, in this same home, on December, 28, 1917 to Martin and Ida (Heydt) Wagner. To his family, Lloyd leaves a legacy of deep Christian faith and an enduring love of farming. He was an active and lifelong member of Trinity Lutheran Church, Missouri Synod, in Fisher where he was baptized on January 18, 1918 and confirmed in the Christian faith on April 12, 1931. He graduated from Fisher High School on May 31, 1935. He farmed his entire working life, first with his grandfather, father and brothers using horse and plow, and later with his sons and grandsons using GPS guided tractors. Tragically, Lloyd lost his father and younger brother, Delbert, in a farm accident. As the eldest brother, the responsibility of running the family farm fell to him. On August 22, 1952 Lloyd married Harriet (Meyer) Wagner, Delbert’s widow and then adopted and became a father to his 3 young nieces, Tamra, Trudith, and Deborah. Together, they had four more children, Timothy, Linnette, Joel and Jill. Lloyd served in various positions on the Trinity Church Council, and on the Fisher Township board.  Lloyd kept active by helping on the farm well into his nineties. He was the happiest when in a tractor. He also enjoyed working in his greenhouse, doing puzzles, and playing card games with his grandchildren.

Memorials may be given to Trinity Lutheran Church in Fisher and Altru Hospice.

To order memorial trees or send flowers to the family in memory of Lloyd Wagner, please visit our flower store.