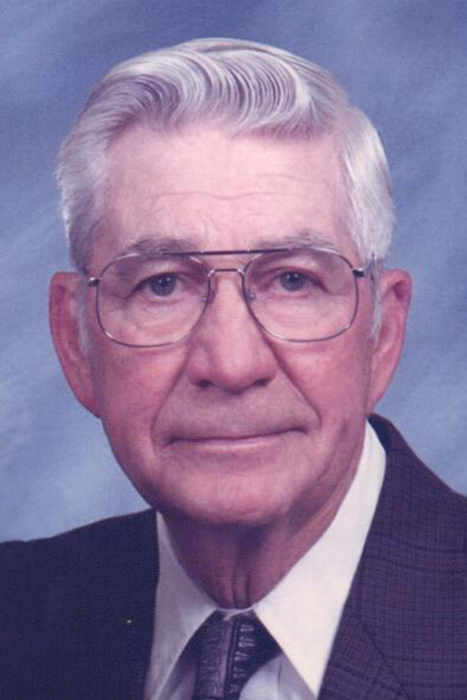 Lloyd Julius Reitmeier, (BossMan), 94, passed away peacefully on December 2, 2017 at home, with family by his side.

Lloyd was born on April 11, 1923, in Crookston, MN to Edward  and Ida (Wentzel) Reitmeier, Sr. He was baptized and confirmed at Our Savior’s Lutheran Church in Crookston, MN. He attended school at the Cottonwood Shelter Country School, finishing eight years of schooling in seven.

Lloyd farmed with his father until entering the Military.  He was in the US Army assigned to the 6th Division, 51st Field Artillery BN.  He served as a Staff Sergeant in the Philippines and Korea, and was Honorably Discharged in 1946.  When Lloyd returned, he continued to farm his entire life, south of Crookston.

On July 10, 1949, Lloyd married the love of his life, Audrey Bergerson, at the First English Church in Eldred, MN. A love so grand as shown by his caring for Audrey for 25 years before her passing on December 2, 2008, exactly nine years prior.

The couple made their home in Fairfax Township, rural Crookston, where they raised their four children, Howard, Patricia, Bonnie, and Evertt.   Lloyd served on the Church Council Board, the Fairfax Telephone Company Board, was a lifetime member of the VFW Post 1902 in Crookston, MN, and also of the American Legion Post 0242 in Fisher, MN.

Lloyd was a member of the RRV Sugar Beet Growers Association and in 1986 received the Half Century Award as a member of the “Edward Reitmeier Family” and was recognized by the RRV Sugar Beet Museum in 2005.  He was an avid deer hunter and enjoyed hunting in the Beltrami Island Forest.  He loved to share the story of his “two immaculate long shots”, once in Montana and once in the Beltrami Island Forest of 315 yards. Lloyd loved summer and winter fishing at Arneson’s Rocky Point, and truly enjoyed his time with Audrey there.

He loved to tell jokes, hunting stories, and recount entire movies that he had watched.  Lloyd was a patient man who was always willing to listen and when asked his advice was always gentle, and wise.  Lloyd was highly respected by all who knew him.

He was preceded in death by his wife Audrey, with whom he shared 60 years together; his parents; one sister and brother-in-law, Meda and Mike Buness; brothers and sisters-in-law, Arnold Reitmeier and Mildred Regimbal, Willard and Grace Reitmeier, Edward and Lucille Reitmeier, Jr., Marvin and Adores Reitmeier, Ernest Reitmeier, and Barbara (Erwin) Reitmeier; a grandson, Eric John Reitmeier; son-in-law, Scott Christians; and a granddaughter-in-law, Wendy (Shereck) Reitmeier.

To order memorial trees or send flowers to the family in memory of Lloyd Reitmeier, please visit our flower store.