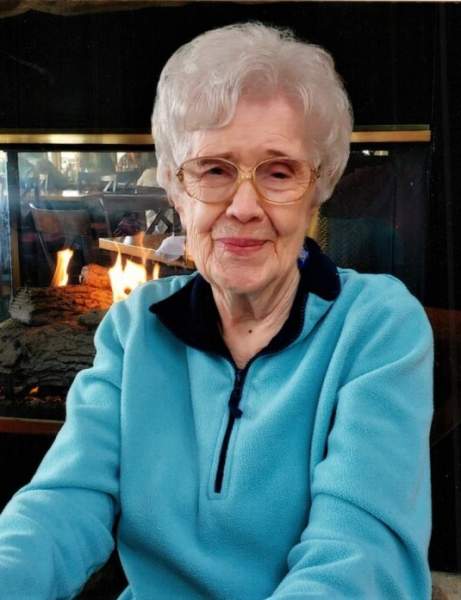 Lillian Myra (Larson) Ellis, 97, of Seattle, WA, passed away on August 14, 2021 in the Foss Home and Village Nursing Home in Seattle.

Lillian, or Lil as she was best known to her friends and family, was a Crookston, MN native, born on October 21, 1923 to Martin T. and Clara H. (Hoiseth) Larson. She grew up on the family farm and was baptized and confirmed at Trinity Lutheran Church. Lil began her education in the Crookston Valley View District 255 country school. She would later attend high school in Crookston at the Northwest School of Agriculture, which today is the site of the University of Minnesota Crookston campus. Lil graduated from there with the Class of 1941. She then enrolled at Interstate Business College in Fargo, ND, earning an associate degree in business in 1943. Lil then moved to Duluth, MN where she was employed by a manufacturing plant there in support of the war effort. Three years later she relocated to Seattle, working first for a bank and later in a dental office. These early years instilled in Lil a love for travel and seeing what was out there. Thus inspired, she found a career path that started with employment for Bon Marche Travel Agency. She would later become a travel agent with Global Express Travel located in downtown Seattle. Lil was trusted by her loyal clientele as she assisted them in planning trips anywhere in the world they wanted to visit. It was known that she could give sage advice because she had been  almost everywhere herself. She loved her co-workers, clients, and friends dearly, and that love was reflected right back to her.

Lil met a young merchant marine from Seattle by the name of Robert Ellis after having lived there for several years. Lil and Robert were united in marriage on November 5, 1970 in Las Vegas, NV. Sadly, Robert became ill and passed away in Seattle a little over 9 months later on August 18, 1971. Lil had her career to sustain her through this hard time in her life. She would make a few trips back to Crookston to see her family through the years but her heart was always in Seattle. She continued to work with Global Express Travel until retiring when she was in her 80’s.

Lil made her home in Pine Hurst Court where she served as a Board Member and bookkeeper for the Association for many years. She enjoyed the theater and frequently attended plays with friends. Playing cards with those same friends was always something to look forward to. Reading was a lifelong passion for Lil as her books took her to places she had been or perhaps had always hoped to see. Lil will be very loving remembered by all who shared in her life.

Lil is survived by Crookston family including her brother and sister-in-law, Melvin and Barbara (Boucher) Larson; several nieces, nephews, great-nieces, great-nephews, and great-great nephews and great-great niece including: Kevin and Carrie Larson and their children: Caila and David Still and son, Hunter, and daughter, Harleigh, Justin and Hayley Larson, Taylor Larson, and Ashton and Jacob Sylvester and children, Jeorgia, Raegan, and Blair; Colleen and Gary Hall and son, Zachary and Sara Hall, and their son, Elijah, and son, Alex Hall; and Heather and Shane Snesrud and children, Aidan, Molly, Brendan, Cale, and Clara; and extended family. In addition to her husband, Robert, Lil was preceded in death by her parents, Martin and Clara Larson; nephew, Michael Larson; and other family members. May God bless the memory of Lillian Myra Ellis.

From Lil’s family in Minnesota heartful thanks to Laurie Plienis, Lil’s dear friend for over 60 years. “Laurie, your devotion to Lil since you were just a young girl, in fact many years younger than her, has been a Godsend. We are grateful that you were always there and such an important part of Lil’s life. Thank you again so very much.”

A memorial graveside service for Lillian Ellis will be held at 10:30 a.m., Friday, October 29, 2021, in the Oakdale Cemetery, Crookston, MN, with The Rev. Greg Isaacson, officiating. The service will be livestreamed by logging on www.stenshoelhouske.com 10 minutes prior to the scheduled start, going to the bottom of Lillian’s obituary page and clicking on the prompt to view.

To order memorial trees or send flowers to the family in memory of Lillian Ellis, please visit our flower store.