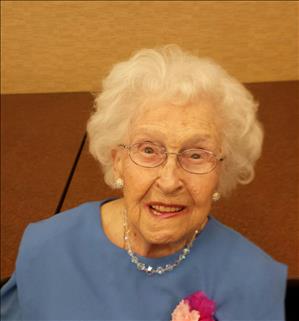 Lillian was born July 20, 1921 to Norwegian immigrants, Herman & Mathilda Brandwick in Crookston MN. She attended school in Crookston. Lillian was united in marriage to Herman Brolsma on April 28, 1947 in Bemidji, MN. They lived in Bemidji for one year and they returned to Crookston where Herman worked for the Charles Perry and then the Charles Kiewel farms. In 1966 they moved into Crookston and she started working at Al's Pizza Plaza. She worked there for many years and then worked for Coast to Coast for over 20 years. Lillian was a member of Our Savior's Lutheran Church for many years and after retirement she joined St Paul's Lutheran Church, where she was active in Bible study and the quilting group. Lillian loved her family and devoted her time to taking care of them. She loved spending time with the grandchildren and great-grandchildren. They always brought a sparkle to her eyes when she saw them. She was a wonderful seamstress, and she enjoyed music, reading, embroidery and cross-stitch, word search, canning and baking for her family. She was a loving mom, grandmother, great-grandmother, and friend who will be dearly missed. Lillian was preceded in death by her husband Herman and by her brothers Adolph (Beatrice) and Stanley (Verna) Brandwick and special niece Kathy Anderson. In laws; George and Jessie Brolsma, Allen and Leah Brolsma, Clarence Terpstra, John Cowell, Sheldon Johnstone, and Ben Newell. She is survived by three daughters, Claire (Chuck) Lyche, Fargo ND, Sharon (Bob) Edmunds, Lakeville MN & Sun Lakes AZ, Pam (John) Schulz, East Grand Forks MN; seven grandchildren; fourteen great-grandchildren; Brother in Law: John (Margaret) Brolsma, Bloomington, MN; Sister in Laws: Charlene Terpstra, Agnes Johnstone, Crookston, MN, and Sady Newell, Fergus Falls, MN; and also many nieces, nephews and family friends. Thank you to the staff at Tufte Manor and Woodside Village for your wonderful care and support during the past four years. To order memorial trees or send flowers to the family in memory of Lillian Brolsma, please visit our flower store.