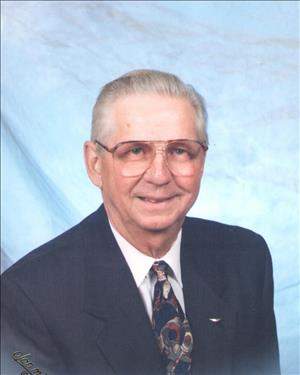 Lester E. Samuelson, 86, of Crookston MN, passed away Saturday October 17, 2015 in Riverview Hospital. A loving husband to his wife Bernice, theirs was a devoted partnership spanning over six decades and bringing forth three children, eight grandchildren, and nine great grandchildren and one great great grandchildren. 'Sammy', as many knew him, was born July 20, 1929 in Crookston, MN the third son of Richard Samuelson and Helen Samuelson (Olson). He was baptized and confirmed in the Lutheran faith along with his brothers Robert, Charles, and Roger and attended country school. Soon after his graduation from the AC at Crookston in August of 1949, Lester was united in marriage to his lifelong love, Bernice Tinkham at Fisher Lutheran Church surrounded by family and close friends. A short time later in 1950 at the height of the Korean War conflict, Lester's service for the National Guard led him to basic training and leadership school as a sergeant, after which he was sent to Korea and promoted to platoon sergeant. During this time the US fought under a United Nations banner with twenty other nations as well as South Korea, united by the common ideal 'Freedom is not Free!' While in Korea, Lester sustained an ankle injury from a nearby landmine explosion. He spent ninety-seven days on the North Korean frontlines with the 2nd Indianhead Infantry Division. He served his country boldly and with courage, returning home in 1953. Lester returned to his native Crookston spending over twenty years with American Crystal Sugar Company as an Agriculturalist. Together he and Bernice raised their three children Julie (Taylor), Janna (Samuelson), and Jon (Samuelson). The family has fond memories of a family trip in a pea soup green Oldsmobile to California to see friends, relatives and visit Disneyland. Throughout his life, Sammy also developed a love of flying. Completing many hours of flight time and rigorous testing, he became the proud owner of two Cessna prop planes. Sammy possessed both a commercial and instrument rating due to his accomplishments in flight. He often took Bernice or friends on local trips around Northern MN, or to see relatives across the US. Lester and Bernice left Crookston in 1978 to operate Westrum's Clothing in Albert Lea, MN. This opportunity allowed the couple to share in the joint venture of running a business and forged a new connection in their partnership.

Upon his retirement Lester and Bernice continued to explore the US together in their motorhome. They enjoyed summer trips to Lake of the Woods, Ontario, Canada, for fishing, and spent winters in their second home in Bonita Springs, Florida. The pair also enjoyed many Christmas holidays with their children and grandchildren in Tennessee and Alabama. In 1993, Lester and Bernice returned to MN permanently and to their final home on Maple Lake. Both enjoyed watching the birds nest in the nearby trees and visiting with neighbors who would often stop over for coffee.

Sadly, Bernice, his wife of sixty-five years passed away in March of 2015. Lester now joins his beloved wife in eternity. Lester is survived by his three children: Julie Taylor of Destin, FL, Janna Samuelson of Nashville, TN and Jon and April Samuelson of Destin, FL. Grandchildren include: Jason Taylor of Destin, FL, Kari (Taylor) and Willie Camp, Kim (Taylor) and Bill Hamlin, Kristine (Taylor) and Shane Goggans, all of Fort Payne, AL, Briana Samuelson of Songdo, South Korea, Ben Samuelson of Birmingham, AL, Amber Tubbs of Jasper, AL, and Ashley Barrentine of Charleston, SC. Also included are nine great grandchildren and one great-great grandchildren. He also leaves a brother and sister-in-law, Roger and Lois Samuelson of Crookston, MN, Juanita Samuelson, sister-in-law of Crookston, MN and Della Samuelson sister-in-law of Thief River Falls, MN and many nieces and nephews and other relatives. Lester was preceded in death by his parents, Richard and Helen Samuelson, brothers Robert and sister-in-law Mona of Crookston, Charles of Thief River Falls, MN and son-in-law Larry Taylor of Fort Payne, AL. May God bless the memory of Lester E. Samuelson. "So now faith, hope, and love abide, these three; but the greatest of these is love." Corinthians 13:13 ESV Services for Lester E. Samuelson will be held Saturday October 24, at 2pm with visitation from 1-2pm at the Stenshoel-Houske Funeral Home in Crookston. Burial will be at the Fisher, Minnesota Lutheran Cemetery. In lieu of flowers the family requests that memorials be given in Lester's name to the following: Fisher Lutheran Church Cemetery Fund, A�a��... Fisher Lutheran Church, South 2nd Street, Fisher, MN 56723; Villa St. Vincent, 516 Walsh Street, Crookston, MN 56716 or Veteran's Administration Medical Center, Attention: Lavonne Liversage, Director, 2101 North Elm Street, Fargo, ND 58108.

To order memorial trees or send flowers to the family in memory of Lester Samuelson, please visit our flower store.