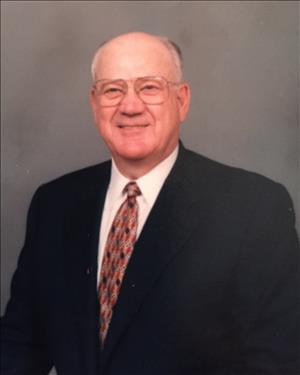 Leonard Vernon Bergan, died December 3, 2015 at his home surrounded by his family. He closed his life of eighty-eight years, the last ten of which he was retired and enjoyed living on Bear Trap Lake three miles west of Amery, WI Leonard was born August 17, 1927 , to Leander and Alma Bergan at the family farm three miles north of Maddock, ND. Leonard received , from his father, his first lessons in the sacredness of the land, the integrity of work and the value of perseverance as he worked beside him planting and harvesting the fields. He graduated from Benson county Agricultural School in 1945. Following graduation, Leonard served in the U.S. Navy serving most of the time in China, Japan and Korea. Upon returning home, he attended Dakota Business College and North Dakota State University. His first position was as a retail salesman for Standard Oil company in Devils Lake, ND. In 1955 he joined First National Bank in Crookston, MN. Four years later he accepted an offer from R.T. McCulla of a partnership in the John Deere dealership in Crookston In 1963 he purchased McCulla's interest and became sole owner of Crookston Implement until he sold the dealership and retired in 1996. Leonard was dedicated to the interests of the farm equipment industry and worked diligently on its behalf.. In 1969 he was elected to the Minnesota-South Dakota Retail Farm and Power Equipment Dealers Association Board of Directors and served as its President in 1977. In 1976 he was elected to the National Retail Farm and Power Equipment Dealers Association Board of Directors and served as Chairman of the Legislative Committee. In 1983 He was elected President of the National Retail Farm and Power Equipment Dealers Association. He also served, for a number of years, on the John Deere Company Dealer Advisory Counsel. Throughout his business career Leonard was involved in the insurance and banking industries. He was elected in 1981 to the Board of Directors of Federated Mutual Insurance company of Owatonna and served in that capacity for twenty one years. He also served as a Director of First National Bank in Crookston for twenty years.

Although Leonard was interested and participated in many things on the state and national level nothing was dearer to him than his home community of Crookston, Minnesota. He was very active and served on the local hospital, school and college boards, committees and fund drives. His earlier years were busy with service in the Junior Chamber of Commerce. He was President in 1959 during which time he was named the Outstanding Jayce President in the state of Minnesota.

He was a member of the Lions, Eagles, American Legion and Knights of Columbus. He was honored by his community in 1970 when they named him King Agassiz of West Polk County for the Red River Valley Winter Shows. In 1984 they again honored him by choosing him as the Grand Marshal for the Pioneer Day Parade in Crookston. In his leisure time Leonard liked nothing better than a sunny day on a great golf course! He also had fulfilled his life long dream of flying when, in l978, he earned his private pilots license. All of these activities Leonard found rewarding and fulfilling but his greatest treasure was his family. He married Patricia Vaughn in 1952. They had five children. Patricia died in l971. Leonard married Jacqueline Syrup in 1972. Upon marrying Jacqueline his family was increased with the addition of her three sons. He is survived by his wife, Jacqueline; his children, Barry Bergan of Crookston, Minnesota, Bridgett (David) Stokka of Binford, ND, Cynthia Bergan of Tucson, AZ, Bart (Mary) Bergan of Amery, Wisconsin, Stacy (Marc) Rusling of Grand Forks, ND; and stepsons, John (Bernie Foster) Lanz of Corvallis, Oregon, Thomas (Wendy Beaton) Lanz of Woodbury, Minnesota and James (Kelly) Lanz of Cottage Grove, Minnesota. He is also survived by twelve grandchildren; Nicholas (Samantha) Bergan, Johnathan (Lauren) Brekken, Leah Brekken, Josuha (Erin) Brekken, Catherine Brekken, Hannah Bergan, Patrick Bergan, Heather (R.J.) Morrisette, Michelle (Shawn) Cariveau, Trisha (Jeff) Peterson, Jordan Rusling, Carly Rusling; step-grandchildren, Meredith Jacqueline Beaton-Lanz, Matthew Beaton-Lanz, Carolyn Beaton-Lanz, Alysson Lanz and Jordan Haley; eight great grandchildren; his brother, Orin Bergan of Mesa, AZ and sister-in-law, Wilma Bergan of Yuma, AZ.

Funeral Mass will be said at 1:30 p.m. Thursday, December 10, 2015 in the Cathedral of the Immaculate Conception in Crookston, MN. Visitation will be Wednesday evening from 5 to 7 p.m. at the Stenshoel-Houske Funeral and Cremation Service in Crookston with a prayer service beginning at 7 p.m. In leu of flowers, donations may be sent to: St Joseph Catholic Church Building Fund Address: 1050 Keller Ave N, Amery, WI 54001 1:30 PM
Cathedral of the Immaculate Conception

To order memorial trees or send flowers to the family in memory of Leonard Bergan, please visit our flower store.