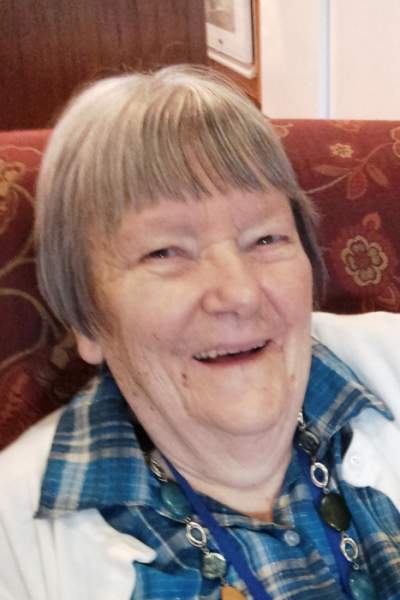 Leah Mary Louise Audette passed away Saturday, March 24th at Prairie Senior Cottages in Isanti, MN, just a few days before her 88th birthday. Leah was born on her family’s homestead in Gentilly Township to Joseph and Eva (Desgrosiellier) Normandin. She grew up with five brothers and one sister, attending Country School in Gentilly. She was baptized, received her First Holy Communion, confirmed and married at St. Peter’s Catholic Church in Gentilly. She married Lester Pierre Audette on September 18, 1950.

Leah and Lester were long-time residents of Crookston, living on Central Avenue, South Washington Avenue, and Barrette Street. She was a homemaker, caring for her husband and children, but also worked occasionally as a “demo lady” at the grocery store and as a housekeeper for several motels and Crookston families. She devotedly took care of the elderly including her mother and mother-in-law and had a big heart for the downtrodden. She loved to make goodies of all kinds and was especially known for her banana bread. She loved Halloween and dressed up in costumes to entertain her friends and family. She was a model of hospitality, hosting holiday dinners and parties, and she was more competitive than she would admit when playing games like bingo and cards. She gently teased and got everyone to laugh as she referred to herself as “the stubborn Frenchman”. On her 80th birthday she swung on the swing set in the park. Oh, and she did love to shop!

Leah was a long-time member of St. Anne’s Catholic Church in Crookston, and later became a member of the Cathedral of the Immaculate Conception. She was a member of the St. Anne’s Sodality, devoting prayer to the Mother of Mary, wearing thin the pages of her prayer book “St. Anne’s Society Manual”.  She was especially pleased to help fund the refurbishing of St. Anne statues in both Crookston MN and Rice Lake WI.

She is also survived by sister in law Alice Normandin, Detroit Lakes, and Doris Normandin, Crookston.

Special thanks to Leah’s caregivers at Prairie Senior Cottages and St. Croix Hospice.

The Mass of Christian Burial for Leah Audette will be Wednesday, March 28 at St. Peter’s Catholic Church in Gentilly at 11 AM. Visitation will be at Stenshoel-Houske Funeral Home on Tuesday from 5-7 PM, with a 7 PM prayer service, and also at the church one hour prior to the funeral. Interment will be in the Calvary Cemetery in Crookston. Memorials are preferred to St. Croix Hospice, Prairie Senior Cottages, or St. Peter’s Catholic Church, Gentilly.

To order memorial trees or send flowers to the family in memory of Leah Audette, please visit our flower store.