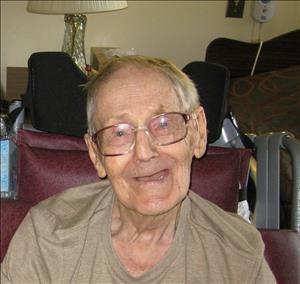 Kenneth Winger, age 87, passed away peacefully with loving family by his side on May 1, 2016 at the Villa St. Vincent in Crookston, Minnesota. He was born to Adolph and Anna (Berg) Winger on August 24, 1928 in Roome Township, near Eldred, MN. He was baptized and confirmed in the Lutheran faith. Kenneth was united in marriage to Juanita Kinder on September 4, 1953 in Harlan, Kentucky while serving in the US ARMY; eventually making their home in Crookston. Kenneth worked for the City of Crookston, and Riverview Hospital, retiring in 1992. No one was a stranger to Kenneth; he loved people, and loved to visit. He enjoyed spending time with his grandchildren. He collected HO trains, clocks, watches, calendars, and spent many hours tinkering with things. Kenneth had a very large music collection that was enjoyed by all. Kenneth was preceded in death by his parents; a brother, Vernon; and two grandchildren, Christopher and Katelyn Dale. He is survived by his wife, Juanita; three sons, Ken Jr. (Debbie) Winger of Crookston, MN, David (JoAnn) Winger, of Cambridge, MN, and Rodney Winger of Crookston, MN; two daughters, Anna (Brad) Stokkeland of Portland, OR, and Brenda (Dave) Dale of Fargo, ND. Twelve Grandchildren, Mike (Adrianne) Winger, Kari Winger, Corey (Tenniel) Winger, Amber (Dan) Dickinson, Samantha Winger, Andrew (Sarah) Dale, Brian Dale, Krystle (Brice) Wieg, Kylie Dale, Kelsey (Dennis) Freborg, and Matthewscott Dale. Eleven Great Grandchildren, Lucas, Gavin, and Brooke Winger, Aiden Campbell, Gaby and Hunter Dickinson, Celia Winger, Emma Buchner, Keira, Devin, and Tobias Dale. There will be a memorial service in the funeral home at 10:00 a.m. Thursday, May 5, 2016.

To order memorial trees or send flowers to the family in memory of Kenneth Winger, please visit our flower store.