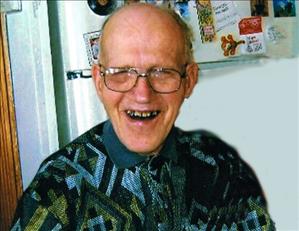 Kenneth "Kenny" Lehman, age 87, of Crookston, MN passed away Tuesday, April 5, 2016 at his home in Crookston. Kenneth Edward Lehman was born September 5th 1928 in Crookston Minnesota to Edward and Elsie (Von Holdt) Lehman. He was Baptized in the Lutheran faith. He lived on the family farm where he drove pickups, tractors and combines; he talked a lot about picking rocks. In 1971 the family moved to a house in Fertile MN. In 1980 Kenny and his sister Bernice moved in with Raymond and Alice Dale of Crookston MN (Harold Station) where he lived for 30 years. In 2010 he moved into REM housing in Crookston where he lived until his death.

In 1972 Kenny enrolled in the DAC in Crookston, he went there 5 days a week and would do crafts work out in the community like cleaning rooms at the hotel. The DAC brought him to camp in the summer where he loved to fish. Kenny love doing puzzles, building with his Legos, doing latch hook and painting pictures with oil paints. Kenny was a very loving person who always had a smile on his face and he loved to give bear hugs! He loved to be outside in the summer mowing the yard and making snowman in the winter. He loved going to the museum in Crookston with Alice and Ray. He is preceded in death by his parents Edward and Elsie , Alice and Raymond Dale and Mark Dale. He is survived by his sister Bernice, Alice's children Sue (Dennis) Larson, Ray (Sharon) Dale, Mary (Clayton) Briggs, Greg (Edna) Dale, Pam Dale, Richard (Brenda) Dale, Ronald Dale, David (Brenda) Dale and their families, REM families and many other relatives. Services will be at 2 p.m. Saturday, April 9, 2016 in Our Saviors Lutheran Church, Crookston. Visitation will be from noon to 2 p.m. Saturday in the Church. Visitation two hours prior to the service.

To order memorial trees or send flowers to the family in memory of Kenneth Lehman, please visit our flower store.