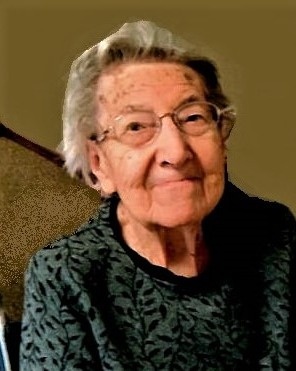 June Goodyke, 98, of Crookston, MN, passed away on October 2, 2022, at the Benedictine Living Community Crookston.

June was born to John and Minnie (Brower) Geerts in Holland, Michigan on August 10, 1924.  At only 13, she graduated from the Holland elementary school and began working at a local restaurant, became a neighborhood nanny, was employed at a couple different factories, and was caretaker for her parents since she was an only child.  She met John Goodyke in 1964 on a blind date, as John and his parents would come to Michigan for the winters from Crookston.  After trips between Michigan and Minnesota, June and John were married on November 26, 1965, and made their home on their farm, north of Crookston.

June and John were very active members of the Christian Reformed Church in Crookston and her faith remained very important to her throughout her life.  After the church closed, she stayed in touch with two very special friends, Jennie Andringa and Fern LaFleur.  Even though June had no children, she was “Junie” to her great-nieces and great-nephews and always had chocolate chip cookies for them.  June loved board games and she and John would play a game every evening.  John passed away on January 28, 2008, during a blizzard.  The weather that night was something she never forgot.

After John’s death June remained on the farm.  Her house was right across the road from her nephew and niece, Richard & Kathy Goodyke.  June would open her curtains at 8 am and close them at 8 pm, which became the unspoken signal that all was well.  In June of 2018, Kathy had left before 8 am and on returning at noon saw that June’s curtain was still closed. She found that June had sprained her ankle and was lying on the floor.  June then moved to the Summit in Crookston, a part of the Villa St. Vincent complex which provided assisted living. A few years later she transferred to the Villa St. Vincent Nursing Home and most recently to the Memory Care Center.  June was noted for her humbleness, independence, stubbornness, and her ability to run her wheelchair around and around the hallways.  She loved bingo and didn’t want to miss a game.

June is survived by cousins from Michigan.  She was able to stay in contact with her cousin, Angie Vander Heuvel, until recently.  John’s family includes nieces and nephews:  Dennis Goodyke, Richard and Kathy Goodyke, Nancie Goodyke, Ron and Mary Goodyke, Dean and Diane Frisk, Janet and Les Sannes, and Jerry and Kim Michaelson; and several great-nieces and great-nephews.

June was preceded in death by her husband, John; her parents, John and Minnie Geerts; an infant brother, Jay Geerts; and from John’s side of the family: Henry and Mamie Goodyke, Anton and Claire Goodyke, and Helen and Lavern Michaelson.  She has now been reunited in heaven with a special great-nephew, Darren Goodyke; and niece, Debbie Wikoff.

The funeral service for June Goodyke will be held at the Stenshoel-Houske Funeral Home in Crookston at 2:00 p.m., Monday, October 17, 2022, with Bill Humiston, Spiritual Care Coordinator of the Benedictine Living Community Crookston, officiating. Burial will follow at the Oakdale Cemetery, Crookston. The service will be livestreamed by going to June’s obituary page at www.stenshoelhouske.com and clicking on the prompt to view.

Memorials to The Benedictine Living Community Center would be welcomed by the family in leu of flowers. Messages to the family may be offered on the funeral home website.

To order memorial trees or send flowers to the family in memory of June Goodyke, please visit our flower store.