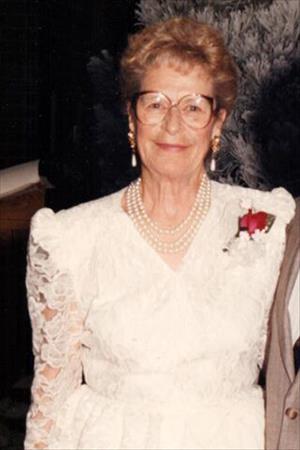 Josephine D. Boucher, 93, Crookston, MN, died Sunday, December 11 at Villa St. Vincent in Crookston. Mass of Christian Burial will be 2:00 PM Friday, December 16 at The Cathedral of the Immaculate Conception in Crookston, Fr. Vincent Miller and Msgr. Roger Grundhaus, officiating. Interment will be in Calvary Cemetery.Friends may call 1 hour prior to the mass at the Cathedral. Josephine Dorothy Boucher was born March 20, 1923 in Crookston, MN to Edward and Maria (LaFramboise) Caillier. She was raised in Gentilly and was baptized and confirmed at St. Peter's Catholic Church in Gentilly. She attended District 105 School in Gentilly Township. Josephine was united in marriage to Harvey Boucher, January 2, 1941 in Gentilly. They were married for 65 years. Sadly, Harvey passed away in 2006. In 1941, they moved to Yakima, Washington and returned to Crookston in 1944. In 1957, they moved to a farm in Andover Township where she lived until 2013. Jo then entered Villa St. Vincent. Harvey and Jo enjoyed many years at their lake home on Maple Lake and spending their winters in Cape Coral FL. What was first and most important to Jo was being a wife and mother. She was always busy making a home and keeping the rock gardens immaculate. They both took great pride in how the farm was groomed to a "T". Jo would often reminisce about how many lunch boxes she would make for Harvey to take to the field. Jo loved to entertain also. Anyone who would stop by the farm was sure to have a cold beverage and food put in front of them. Jo was a member of St. Ann's Catholic Church and the Cathedral of the Immaculate Conception both in Crookston. She enjoyed singing in the choir and was a member of the Bible Study Club and the church Ladies Guild. Jo had a great love for her family and was so proud of all of her 12 grandchildren and their families. Left to mourn her are her children: Wayne "Butch" (Nancy Miller-Boucher) Boucher of Crookston, Barbara (Melvin) Larson of Crookston, Gordon (Nancy) Boucher of Big Lake, MN and Terri Boucher of Apple Valley, MN; 12 Grandchildren: Todd, Scott, Jackie, Jason, Brian, Jeffrey, Kristi, Shawn, Brent, Nathan, Allissa and Breanna, 15 Great Grandchildren, a brother: Steve Caillier of Crookston and 2 sisters: Elayne Hannah of Mentor and Bonnie (Frank) Marra of Scottsdale, AZ. In addition to her husband, Harvey, she was preceded in death by 5 brothers: Bob, jerry, Norman, Paul and infant, Joseph; 4 sisters: infants, Lorraine and Lucy, Annette Fournier and Marion LaPlante. Stenshoel-Houske Funeral Home is serving the family.

To order memorial trees or send flowers to the family in memory of Josephine Boucher, please visit our flower store.