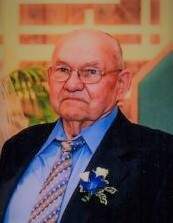 John Edward Peck, 84, of Crookston, MN, passed away peacefully early Monday morning, November 26, 2018, at Altru Hospital in Grand Forks with his loving family at his side.

John was born at Red Lake Falls, MN on December 19, 1933, one of 8 children of the union of Karl and Eleanor (Larum) Peck. He grew up on the family farm near Euclid, MN and attended nearby Belgium Township School. On July 9, 1953 John was united in marriage to Helen Ann “Dolly” Weiland at Euclid. Their marriage would come to be blessed by the births of 8 children. In 1954 the couple moved to Crookston and John entered the US Army on September 25th of that year. After his basic training was completed at Ft. Leonard Wood, MO, John was assigned to the Armored Division of Fort Knox, TN. From there he shipped out for Korea, where he spent the next year as an Armor Crewman with the 7th Infantry, 15th Division fighting the enemy during the Korean War. In recognition of John’s service to his country, a grateful nation awarded him the Marksman Medal, 1st Class Gunner Medal, the Good Conduct Medal, and the National Defense Medal. Following his honorable discharge on June 30, 1956 he was reunited with his beloved Dolly in Crookston and began farming for the Kliner Brothers. In the early 1960’s he started working at the Sanitary Dairy in Crookston, and in 1967 became employed by the Minnesota Department of Transportation. While performing state highway maintenance in northwest Minnesota, he also worked part-time for Solheim Farms. After his retirement from MNDOT in 1997, John continued farming for the Solheim’s for what would prove to be a total of 45 years.

John and Dolly were members of the Cathedral of the Immaculate Conception, and John also held memberships in the Knights of Columbus, the Euclid American Legion Post and the Crookston Gun Club. He enjoyed hunting and fishing, and going camping with Dolly and the family. Sadly, Dolly passed away on October 4, 2000. Several years later his son, Douglas, passed away on November 24, 2009.

In addition to his wife, Dolly, and son, Doug, John was preceded in death by his son-in-law, Jeffrey Moberg; parents, Karl and Eleanor Peck; 2 sisters, Millicent (Emery) Gendron and Irene (Stanley) Teal; a brother, Richard Peck; and a brother-in-law, Ralph Nice. May God bless the memory of John Edward Peck.

The memorial service for John Peck will be held at 2PM, Friday, November 30, 2018, at the Cathedral of the Immaculate Conception in Crookston. Visitation with the family will be at the Cathedral on Thursday from 5-7PM, with a 7PM prayer service, and for one hour prior to the service on Friday.  Inurnment will follow in the Calvary Cemetery in Crookston. Military Honors will be provided by the Euclid American Legion Post and the Minnesota National Guard Honors Unit.

To order memorial trees or send flowers to the family in memory of John Peck, please visit our flower store.