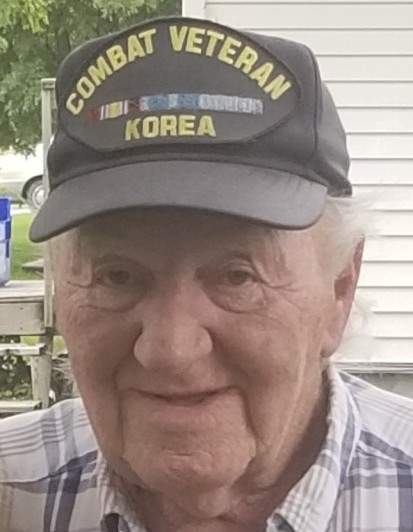 John Orvis Hennager, 84, of Crookston, MN, and formerly of Minnewaukan, ND, passed away Sunday afternoon, March 6, 2022, at the Benedictine Living Community Crookston with members of his family at his side.

John was born in Crookston on May 16, 1937 to Earl and Nettie (Dale) Hennager. He grew up in Crookston where he graduated from Central High School. John entered the US Army on December 8, 1954 and was stationed overseas in Germany. Following his honorable discharge on March 29, 1957 he returned to the Crookston area. John married Elaine Nelson and they became parents of 3 little boys: Ernest, James, and Antony, who all passed away before the age of 1 from the same congenital condition. For most of his life John worked as a farm laborer, machinist, and mechanic. He would later wed Karen Hed and together they had 2 boys, John Lee and Charles Clark Hennager. While the family was living near Scandia, MN tragedy struck with the accidental drowning of both boys while attempting to launch a raft on a nearby pond. John continued to make his home in various places around Minnesota and North Dakota and eventually was united in marriage to Estelle Herman. The couple made their home at Minnewaukan and her son, Terry and his wife, Catalina, and a step-great-grandson, Aiden Thomas, became part of his family as well. Fourteen-year-old Aiden was raised in John and Estelle’s home since he was 7 months old. Estelle passed away in October of 2020.

Throughout his life John enjoyed working with leather, making wallets and other types of leathercraft for his family and friends. He was very accomplished at auto body repair, combining it with his skills as a welder and machinist. John’s most enjoyable form of relaxation was playing his guitar. An avid outdoorsman, he loved to go fishing and hunting and held memberships in the North American Fishing and Hunting Clubs. He was extremely proud of his service to his country and was a lifetime member of the Valley City, ND VFW Post.

Loving family members include his stepson, Terry Herman Sr. and his wife, Catalina, of Fort Totten, ND; step-great- grandson, Aiden Thomas; and 29 step-grand and great-grandchildren. He also leaves a sister, Olive Sperling of Bemidji, MN, and several nephews and nieces, including Clayton and Mary Briggs of Crookston who have been caring for Uncle John the last few weeks up until the time of his passing. In addition to his wife, Estelle, and 5 sons, John was preceded in death by his parents; sisters, Polly Christine Worf and her husbands, David Briggs and Chuck Worf, and Edna Klema and her husbands, Roy Briggs, Lawrence “Bud” Brooks and Martin Klema; and 3 brothers: Virgil and Mary Hennager, George and Carol Hennager, and Ernest Hennager, who died as a child.

The Funeral Service for John Hennager will be held at 2:00 p.m., Monday, March 14, 2022, at the Stenshoel-Houske Funeral Home in Crookston with Pastor Steve Bohler, officiating. Visitation will be for one hour prior to the service. Military Honors will be provided by the Crookston Veterans Council and the MN National Guard Funeral Honors Team from Moorhead. The funeral will be livestreamed by going to John’s obituary page at www.stenshoelhouske.com and clicking on the prompt to view. Burial will be in the Oakdale Cemetery, Crookston, in the spring.

Online registry and message of condolence may be made at the funeral home website.

To order memorial trees or send flowers to the family in memory of John Hennager, please visit our flower store.