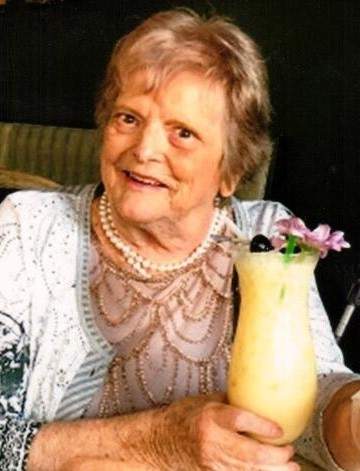 Joan Elizabeth Osterberg, 82, of Grand Forks, ND, and formerly of Mentor and Minneapolis, MN, passed away at Parkwood Place early Saturday afternoon, June 23, 2018, with family by her side.

Joan was born in Crookston MN on October 11, 1935, the oldest of three children of the union of Elmer Lawrence and Elizabeth May (Ranger) Bredlie. She was baptized and confirmed in the Lutheran faith, educated in both Eldred and Climax, MN schools, and graduated from Climax High School in 1953. Joan went on to attend the University of North Dakota in Grand Forks, earning her degree as a Registered Nurse in 1957. She then moved to Minneapolis, after accepting a position as an RN at the University of Minnesota Hospitals. There she met a young physician, Dr. Kenneth Arvid Osterberg, who was completing residencies in multiple specialties at the University Hospitals. Joan and Ken were united in marriage on March 18, 1961 in Crookston. Their union became complete with the births of their three daughters: Chris, Carrie, and Marin. Joan spent a considerable amount of time volunteering at a NIP (Neighborhood Involvement Program) Clinic in the Twin Cities. In 1985 she and Ken began wintering in Venice, FL while spending summers at Cable Lake, near Mentor. Together, they were members of St. Paul’s Episcopal Church in Minneapolis and St. Mark’s Episcopal Church in Venice. Joan was also active in the League of Women Voters. Sadly, Ken passed away on October 16, 2000 after a lingering illness.

Joan continued to make her home at Cable Lake. Time and again throughout her life she demonstrated her generous heart, love of animals, crazy sense of humor, colorful personality, and vibrant style of dress. She enjoyed taking cruise vacations, lake life, playing cards and “Words with Friends” (online scrabble), and going store and online shopping, especially for shoes. Special time was always made for visits from her seven grandchildren. Original; one-of-a-kind; unforgettable; these were all attributes that described Joan to her loving circle of family and friends; and she will forever hold a memorable place in the hearts of those who have shared in her life.

Joan is lovingly survived by her three daughters and sons-in-law: Chris and Doug Prybylowski of Chester, NJ, Carrie and Jack Kelley of Park City, UT, and Marin and Kevin Kopper of Rochester, MN; seven grandchildren: Ann Prybylowski of Chicago, IL, Andrew Prybylowski of Dallas, TX, Laura Kelley of Oakland, CA, Katie Kelley of Washington, DC, Morgan Kelley of Salt Lake City, UT, Kelsey Kopper and Leo Kopper, both of Rochester, MN; brother and sister-in-law, Rick and Kathy Bredlie of St. Cloud, MN; sister and brother-in-law, Ruth and Gary Hanson of Fargo, ND; nieces, nephews, other relatives, and friends. In addition to Ken, her beloved husband of thirty-nine years, Joan was preceded in death by her parents, Elmer and Betty Bredlie; and parents-in-law, Kenneth A. and Evelyn Osterberg. May God bless the memory of Joan Elizabeth (Bredlie) Osterberg.

A funeral service honoring the life of Joan Osterberg will be held at 10:30 am, Saturday, June 30, 2018, at the Stenshoel-Houske Funeral Home in Crookston, MN with Mark Ellingson, Chaplain, Altru Health System, Grand Forks, officiating. Visitation with the family will be at the funeral home on Friday from 5-7:00 pm, with a 7:00 pm prayer service, and will continue from 9:30-10:30 am Saturday. Interment will take place in the First English Cemetery at Mentor, MN. In lieu of flowers please consider a gift in Joan’s name to Altru Hospice of Grand Forks or the Northwest Minnesota Women’s Fund (201 3rd Street NW, Bemidji, MN 56601.)

To order memorial trees or send flowers to the family in memory of Joan Osterberg, please visit our flower store.