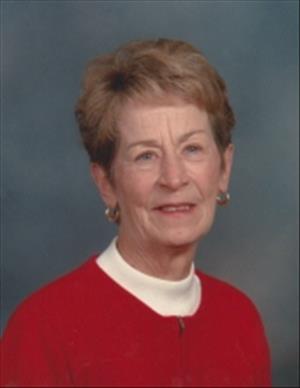 Joan Marie Jansen, age 84 of Oshkosh, passed away on Friday, April 14, 2017 with her family by her side. She was born on May 13, 1932 in Fisher, Minnesota, the daughter of the late William and Margaret (Majeres) Conneran. She graduated Valedictorian of her class in 1951 from St. Joseph's Academy, and earned a Bachelor of Science degree in Nursing from the Sisters of St. Joseph's School of Nursing in Grand Forks, North Dakota in 1954. Joan was united in marriage to Paul L. Jansen Jr. on June 14, 1958 in Fisher, Minnesota. Their marriage was blessed with five children. Our Mother put family first and enjoyed being with her children and grandchildren every chance she could, playing an active role in all our lives. She made every family occasion a truly special one, and was such a wonderful cook and baker. Our mother was truly the "glue" that connected our family and she established fun-filled annual traditions that we will forever cherish. Of Irish heritage, Mom especially cheered for the Fighting Irish (and the Badgers, too!), and was a devoted fan along with the family. Joan enjoyed traveling and made several trips to Ireland reconnecting family roots. Joan had a strong faith and was actively involved in numerous volunteer roles supporting St. Mary's Parish and Lourdes Academy, where her children attended. She was a founding member of the Oshkosh Antique Club and enjoyed learning about and collecting many special "treasures". In addition to her busy family life, Joan also played a leading role in the family business, working full time there for over 40 years. She was a tremendous example of someone who truly could "do it all" in a special, quiet way, always approaching life with a "cup half full" positive attitude. We will miss her dearly and are so lucky to have been chosen as her family. Joan is survived by her husband, Paul of 58 years; three sons: William "Bill", James "Jim" and John Jansen all of Oshkosh; two daughters: Mary M. (Thomas) Norman of Atlanta, GA and Tricia (Daren) Heflin of Houston, TX; six grandchildren: Shaun (Caroline), Shanon and Shelby Jansen and their mother, Julie; Isaac Jansen and his mother, Tammy; Austin and Ryan Jansen and their mother, Susan; two brothers, Michael and William (Mary) Conneran Jr., and sister-in-law, Margaret Poeschl. She is further survived by many nieces, nephews and dear friends. Joan is preceded in death by her parents, one brother, Lester Conneran, five sisters: Bernice Widner, Bonnie Jean Bastnagel, Margaret Mary "Toodles" Crane, Eraine McDonald and Frances "Peggy" Smith.

To order memorial trees or send flowers to the family in memory of Joan Jansen, please visit our flower store.