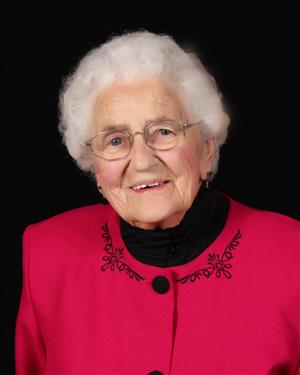 Jessie was born on her parent's farm 3 miles West of Crookston on February 1, 1920. She was the 8th of 10 children to Dutch immigrants Rients and Marie (Woudstra) Epema. Growing up, Jessie attended Crookston public schools, graduating from Crookston Central High School in 1937. Jessie was united in marriage to George Simon Brolsma on September 7, 1940 at the Christian Reformed Church in Crookston, where she and George were active members during their youth. After their marriage, George and Jessie lived and farmed near the Minnesota communities of Beltrami, Erskine and McIntosh. It was during this time that their three daughters, Janet, Carol and Cindy were born. In each of these communities they formed many lifelong friendships. In 1957, they returned to Crookston where they established George Brolsma Construction Co. and operated that business until George's retirement in 1981. Jessie was also employed at J.C. Penny's in the early years of their return to Crookston. Jessie was a longtime member of Trinity Lutheran Church in Crookston. She was also active in WELCA, Crookston's garden club and homemakers groups. Aside from her deep abiding love for her husband and family, Jessie's greatest passions were enjoying the wonders of nature, especially her flower gardens and the birds that visited. She spent long, blissful hours in her yard. George was heard on one occasion telling her that he needed to put a head lamp on her hoe to help her see the weeds after sunset.

Jessie also loved genealogy and researching her and Geroge's Dutch ancestry. It was important to preserve her family history for future generations. She felt a profound connection to her and George's extended family and nurtured those relationships whenever she could. She was a kind and loving wife, mother, grandmother and great grandmother. She was supportive and generous to many others with her time and talents. Jessie is survived by three daughters, Janet Gawrylow of Crookston, Carol (Donald) Sanders of Tulaby Lake, and Cindy (Greg) Conkins of Duluth; grandchildren, Jodi Gawrylow, Scott (Tricia) Sanders, Steven (Laurie) Sanders all of Crookston; Susan (Jeff) Jennings of AZ; Christopher Conkins of IL; and Corey Conkins of Duluth; great-grandchildren, Zachery, Sophia, Samantha and Georgia Sanders, and Conner and Cayden Jennings; In-laws, Charlene Terpstra, Agnes Johstone and Marvela Epema of Crookston, Lillian Brolsma of East Grand Forks, Sady Newell, Fergus Falls, and John and Margaret Brolsma of Bloomington, and over 40 nieces, nephews and other relatives. Jessie is preceded in death by the love of her life, husband George and all of her siblings; Sam Epema, Flora Hosvet, Seitze Epema, Agnes Blokzyl, Ann Pederson, Gertie Tysma, Bertha Newell, Ted Epema and Tillie Walker and son in law David Gawrylow.

Visitation one hour prior at the church

To order memorial trees or send flowers to the family in memory of Jessie Brolsma, please visit our flower store.