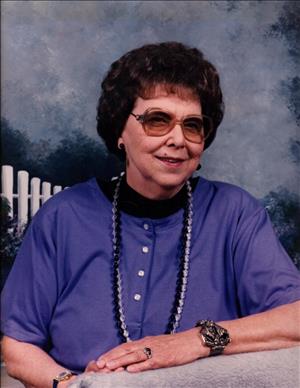 Jeanne Elayne Sawyer, 91, of Crookston, MN, passed away Thursday, January 19, 2017, at the Villa St. Vincent in Crookston, where she had been a resident since September of 2016.

Jeanne was born in Crookston on March 18, 1925, one of 4 children of the union of William G. and Mary (Erickson) Sawyer. Jeanne grew up in Crookston, attended Washington Elementary School, and graduated from Central High School in 1943. She spent her entire life in Crookston and her first employment was at the Ben Franklin Store, and later in the office of Al's Body and Auto Shop. For over 30 years Jeanne was the friendly voice on the telephone and the first person to greet visitors to the Polk County Veterans Service Office in the Courthouse. She enjoyed her position and the Veterans Service Officers and people she worked with. But most of all Jeanne was grateful to provide assistance to the many veterans and their families that she met over those many years. Jeanne was a lifelong member of the VFW Auxiliary. She was a very gracious and humble person, generous to everyone, and especially to her sister and brothers, and their families. She will long be remembered and very sadly missed.

Loving family members include her sister, Arlyne McCleary of East Grand Forks, MN; brother, Lloyd Sawyer of Ankeny, IA; and many nieces and nephews and their families who were grateful to have been a part of Jeanne's life. She is preceded in death by her parents, William and Mary Sawyer; brother and sister-in-law, Robert and Geraldine "Jerry" Sawyer; brother-in-law, David McCleary; sister-in-law, Loy Sawyer; a cousin, James (Nellie) Erickson, who was raised by William and Mary and was more like a brother; and her very special friend, William "Bill" Welsh. May God bless Jeanne's memory.

The funeral service for Jeanne E. Sawyer will be held at 2:00 p.m., Friday, January 27, 2017 at the Stenshoel-Houske Funeral Home in Crookston with The Rev. Greg Isaacson, officiating. Visitation will be for one hour prior to the funeral. Interment will be in Greenwood Cemetery, Fisher, MN, in the spring.

A graveside service for Jeanne will be in the spring.

To order memorial trees or send flowers to the family in memory of Jeanne Sawyer, please visit our flower store.