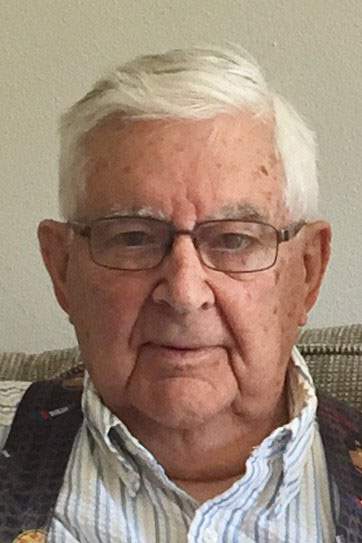 James Edward Waxler, 93, of Crookston, MN, passed away Tuesday afternoon, April 3, 2018, at the Villa St. Vincent in Crookston, MN, where he had been a resident since last December. Jim was born in Fargo, ND on February 27, 1925 to Frank and Kathryn (St. Jacque) Waxler. The family lived in Mapleton, ND, until moving to a farm near Gardner, ND when Jim was nine years old. He worked alongside his father in their fields and attended Gardner High School.   In 1947, Jim moved to Hunter, ND where he was employed by State Oil and Auto.

On May 21, 1947 Jim was united in marriage to Jordyce Yvonne Skue at First Lutheran Church in Hunter. Over the years their marriage was blessed by the births of four children: Bruce, Kathy, Brian, and Brent. Very sadly, Brent passed away on October 13, 2007. From 1951 to 1953 Jim and Jordyce made their home in Harwood, ND before moving to Fargo. Jim worked for Bill Burkholder Welding and Auto Repair and was later employed by the Cass County Implement Company. In 1959 they came to Crookston to continue raising their family, while Jim began his career with American Crystal Sugar during the Christmas holiday season. After twenty-six successful years with Crystal he took his well-earned retirement in 1985. In semi-retirement he worked for Rodney Beiswenger on his rural Fisher, MN farm, and then for Wayne Erickson on his farm near Climax, MN.

Jim and Jordyce were longtime members of Trinity Lutheran Church. Jim was also Past-President of Crookston Eagles Aerie 873, Past-Master of the Crookston Masonic Lodge Pierson Chapter 41 and a member of the Order of Eastern Star and Kem Temple Shrine, was Past-District Deputy and Exalted Ruler of the Elks, was Past-President of the local AARP, and participated in activities at Crookston’s Golden Link. Jim was always there to lend a hand to those who were less fortunate. In 1997 he and Jordyce were honored as Crookston’s Experienced Americans. Together, they enjoyed many warm and wonderful friendships and were saddened as the years went by and those friends began to pass. Time spent with family was a treasure; and sharing their many accomplishments an absolute joy. On August 8, 2016 Jordyce was called to her heavenly home. The family rejoices in the knowledge that Jordyce and Brent were there waiting for Jim and are together again. May God bless Jim’s memory.

The memorial service for James Edward Waxler will be held at 10:30 am, Saturday, May 5, 2018, at the Trinity Lutheran Church in Crookston, MN with the Rev. Greg Isaacson, officiating. Visitation with the family will be at the Stenshoel-Houske Funeral Home on Friday, May 4, 2018 from 5-6:30 pm, with a 6:30 pm Masonic Service, that is open to the public, followed by a 7:00 pm Prayer Service, and also at the church for an hour before the funeral. In lieu of flowers the family requests that memorials be given in Jim’s memory to an organization of the giver’s choice.

To order memorial trees or send flowers to the family in memory of James Waxler, please visit our flower store.