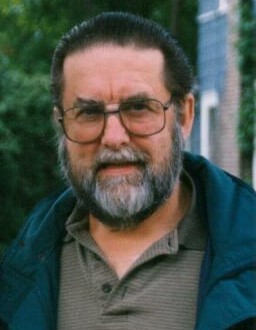 Jimmy, as he was lovingly known to his siblings, was born at Crookston, MN on February 27, 1938, 1 of 13 children of the union of Vital and Florence (St. Marie) Brouillard. He was baptized and confirmed at St. Anne’s Catholic Church, attended St. Joseph’s Academy Grade School, and graduated from Cathedral High School with the Class of 1957. Jim enlisted in the U.S. Navy on September 9, 1957 and served as a Corpsman at the Great Lakes Naval Hospital, the Bethesda Naval Hospital, and aboard the USS Mt. Baker for over 2 years. He received his honorable discharge on June 12, 1961 but remained with the Navy Reserve until June 12, 1963. He lived in Minneapolis for a few years where he was employed by Brown-Bigelow Printing Company. After returning to Crookston for a short while Jim moved to International Falls, MN to work for his cousin, Ronald Brouillard, at Border State Heating. He was united in marriage to Karen Marie Cowlishaw at International Falls, MN on December 2, 1989. Jim was quoted many times saying “Karen was the best thing that ever happened to me,” and they were inseparable. Later after working part-time for the Minnesota DNR, Jim was employed at the Boise-Cascade Paper Mill. During these years he also looked after several apartments he owned, keeping up with maintenance and other tenant concerns. In retirement he and Karen enjoyed worked together on week-ends at a senior home in International Falls and spent several winters in Mayer, AZ. Jim and Karen always had cocker spaniels as pets and the pups became an important part of their family, always keeping them company as they went on their daily walks around town or hiking through the woods. After Karen had a heart attack she and Jim moved to Crookston in 2013. Jim was her faithful caregiver as they made their home at the Summit. Sadly, Karen passed away on January 30, 2014. Not long after, Jim’s health began to decline and he eventually moved from the Summit to the Villa St. Vincent side of the complex.

Jim was a longtime member of St. Thomas Aquinas Catholic Church in International Falls and was a 4th Degree Knight of Columbus in their Council. While living in Crookston he was a member of the Cathedral of the Immaculate Conception parish. Jim loved being part of a big family and treasured the time he spent with them. They became his biggest source of comfort as he dealt with the profound loss of Karen.

A Memorial Mass of Christian Burial for James Edward Brouillard will be held at 2:30pm, Friday, November 15, 2019, at the Cathedral of the Immaculate Conception in Crookston. Visitation with the family will be for one hour prior to the service. Military Honors will be provided by the US Navy Honors Team from Minneapolis and the Crookston Veterans Council. Inurnment will take place in the Calvary Cemetery, Crookston. In lieu of flowers memorials may be given to the Villa St. Vincent.

To order memorial trees or send flowers to the family in memory of James Brouillard, please visit our flower store.