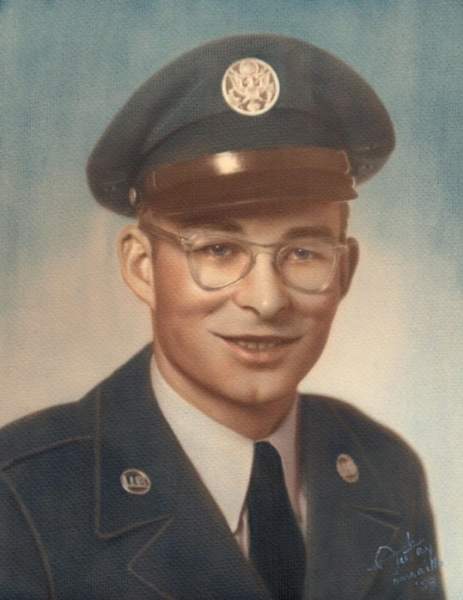 Herman Melbourne Thompson, 90, of Fertile, MN, died on Thursday, August 1, 2019, at the Villa St. Vincent in Crookston, MN. He was born on March 13, 1929, to Hans and Mary (Rarick) Thompson at Climax, MN.  They moved to a farm in Woodside Township, near Maple Bay, MN, when Herman was 4 years old.  He attended Hillside Country School and Mentor High School, Mentor, MN, graduating in 1947. In 1952, Herman enlisted in the United States Air Force.  He was based in Amarillo, TX, from 1952 to 1956.  During this time he met Camilla Olsen.  They were married on February 21, 1953, in Clovis, NM.   After being Honorably Discharged, Herman and Camilla returned to Maple Bay.  Herman worked on the family farm until 1960. In 1960, Herman received employment with the Air Guard in Fargo, ND, serving from 1960 to the early 1990’s.  Throughout these years, Herman developed many skills that he was able to pass along and help his children, grandchildren and friends with building and maintenance projects. Herman volunteered as a Boy Scout Leader when his son Keith got involved with Scouts.  Over the years, Herman received the Order of the Arrow Honors from the Scouts.  Camping was a family activity that created a lot of wonderful memories and traditions, especially when the kids were younger. In the early 1990’s, Herman retired from the Air Guard and moved to Fertile, MN.   Until he was in his late 70’s, Herman worked with his son’s construction business.  Herman’s philosophy was “If you are going to do something, do it right” and this way of thinking has been passed on to his children and grandchildren.  He was a highly skilled wood craftsman who used these skills to fix furniture, create beautiful trim and features in their home, as well as passing along these talents to his grandchildren as they worked on projects together in the wood working shop.  Over the years, Herman and Camilla were able to travel to their daughter’s homes in North Dakota and Rhode Island.  Being able to visit their family brought them a lot of joy. Herman was a quiet and gentle man with deep faith and convictions.  When he spoke, people would listen, as Herman was a man of wisdom. His faith in God was seen rather than spoken and this has been a tremendous example for all who knew Herman.

The funeral service for Herman Thompson will be held at 11:00am, Friday, August 9, 2019, at the Resurrection Free Lutheran Church in Beltrami, MN with Pastor Dale Finstrom, officiating. Visitation will be at the Stenshoel-Houske Funeral Home in Crookston on Thursday from 5-7:00pm, with a 7:00pm prayer service and sharing of memories led by Pastor Dale Finstrom and Anders Macy. Visitation will continue at the Church for one hour prior to the funeral. Military Honors will be provided by the US Air Force Honors Team from the Grand Forks AFB. Interment will take place at the Maple Bay Cemetery, rural Fertile. Due to family sensitivities in lieu of flowers consider a memorial, and refrain from wearing perfumes or cologne.

To order memorial trees or send flowers to the family in memory of Herman Thompson, please visit our flower store.