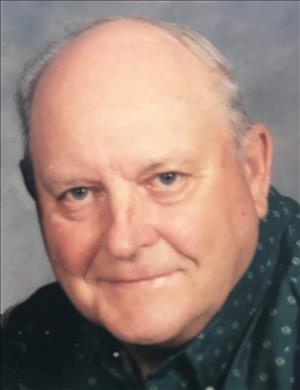 Herbert R. Law, 85, of Beltrami, MN, died peacefully at his rural home Tuesday afternoon, April 11, 2017. Herb was born in Crookston, MN on January 6, 1932 and was the son of Eli and Lyda (Elsie) (Wehmhoefer) Law. He was baptized and confirmed at the United Methodist Church in Beltrami and grew up on the family farm in Reis Township. Herb's education began in a country school for one year and the Beltrami School through the 8th grade. He then attended the Northwest School of Agriculture in Crookston, where he received his high school diploma. Herb enlisted in the US Army on March 24, 1953 and proudly served his country in Korea during the Korean War. Prior to his honorable discharge on January 31, 1955, CPL Herbert R. Law was awarded the National Defense Service Medal, United Nations Service Medal, and Korean Service Ribbon. He returned home and took over the reins of the family farming operation from his father. On September 3, 1966 he was united in marriage to Delores Goschke at Langdon, ND, and together they became parents to a daughter, Lisa Marie in 1968 and son, Darrin Michael in 1970. Sadly, Delores passed away August 24, 1972. Herb continued to farm and on November 8, 1975 married Margaret Oistad of Karlstad, MN. He retired several years ago after a farming career that spanned 60 years.

Herb had some unique hobbies that included his quite large collections of ball-point pens, John Deere toy tractors, and rocks that he found to be particularly pleasing to his eye. He had been a lifetime member of the Beltrami United Methodist Church. The greatest source of joy and pride for Herb was his farm and the farm life, which he shared with his family and loved ones generously. Twenty-four/seven, 365 days a year, Herb's mind and heart were on his farm.

Herb is survived by his beloved wife, Margaret; daughter and son-in-law, Lisa and Paul Hatlestad of Erskine, MN; son, daughter-in-law, and grandsons, Darrin and Diane Law of Grand Forks, ND and Dane and Daniel; sister, Elaine Westling of Drayton, ND; nephew and great-nephew, Lee (Laurie) Westling and Eli of Grand Forks; and niece and great niece Beverly Lemke and Alesha, and nephew and great niece and nephew Roger Lemke and Jenna and Brandon, all of Sacramento, CA. In addition to his first wife, Delores, Herb was preceded in death by his parents, Eli and Lyda; brother-in-law, Rolland Westling; sister, Helen Gustafson and her husbands, Bert Lemke and Len Gustafson; and nephew, Jerome Lemke. May God bless Herb's memory.

The funeral service for Herbert R. Law will be held at 7PM, Monday, April 17, 2017, at the Stenshoel-Houske Funeral Home in Crookston with visitation prior to the service from 5-7PM. Military Honors will be provided by the Crookston Veterans Council.

To order memorial trees or send flowers to the family in memory of Herbert Law, please visit our flower store.