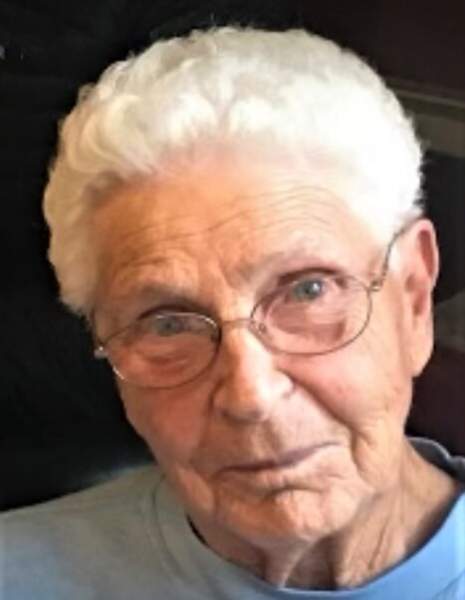 Hank, as she was affectionately known throughout her life, was born on June 30, 1928 in Andover Township, near Eldred, MN, the daughter of Frank and Rosa (Slyt) DeBoer. When she was 2-years old the family moved to a farmstead in Roome Township, closer to Eldred. Hank was baptized and confirmed in the First English Lutheran Church in Eldred and began her education in the Eldred Consolidated School. She later attended nearby Climax High School, graduating with the Class of 1946. Hank then enrolled in the NW School of Business in Minneapolis before returning home to work for Dr. Hendrickson, a Crookston optometrist. She recalled that one of the benefits of her employment with the clinic was being able to make her own glasses! On November 27, 1948 Hank was united in marriage to Irvin “Bike” Beiswenger in Our Savior’s Lutheran Church in Crookston. While making their home in Crookston Bike worked for Hank’s father, Frank, and brother-in-law, Bill, on the DeBoer family farm. In 1952 they moved to Eldred and Bike continued farming. Together, Hank and Bike raised their 2 children, Barb and Don, in a very loving home. Eventually they took over the farming operation with Hank working right alongside Bike. Quoting Hank, “I didn’t like to cook but I loved being in the field and mowing the lawn.” Supporting the kids in all their school and church activities remained a priority for them both throughout those years. When Barb left home to pursue her college studies Hank decided it was finally time to get a dishwasher. Sadly, at the age of 50 and after several months of illness, Bike passed away on October 3, 1975. He was taken much too soon but Hank continued to run the farm knowing she was up to the task and was going to ‘take it one day at a time.’ She eventually partnered with Gordy Tiedeman until retiring in 1993. Hank had been a resident of the Summit in Crookston for several years before moving to the Villa this past March.

Hank remained a lifelong devoted member of First English Lutheran Church and was very active with the Ladies Aid. She also volunteered her time with Crookston’s Bethesda Hospital, which later became known as Riverview Hospital, and finally as RiverView Health. For many, many years Hank could be found in the Auxiliary’s Gift Shop every Wednesday from 10-4. She was a former President of the organization and in 2003 was honored by the Riverview Hospital Association as Volunteer of the Year. Hank also held memberships in the MN Farmers Union, and the Auxiliaries of the Fisher American Legion and Crookston VFW.

Hank enjoyed spending time in her flower gardens and keeping the yard and grounds looking beautiful, while accompanied by the songs of the birds at her many feeders. She was an avid sports fan of all the local high schools, and was especially loyal to the Vikings, Twins, and all Minnesota Gopher sports teams. Bowling was a passion of Hank’s as she participated in 4 different leagues every week. She was especially proud of her highest game, rolling a 276; stating she couldn’t miss! Eventually she found her way to the Minakwa Golf Course, while enjoying many great summers chasing that little white ball with her gal pals. One of Hank’s closest friends was her sister-in-law, Edith Housenga, and they enjoyed numerous trips together, including adventures to Alaska, Washington, DC, and Europe.

Left to mourn Hank’s loss and celebrate a life she lived to the fullest are her loving daughter, son, and their spouses: Barbara and Gregg Claassen of Florence, AZ and Don and Bobbi Beiswenger of Prior Lake, MN; 3 grandchildren: Chris (Jill) Claassen of Greensboro, NC, Alex (Zac) Pike of Prior Lake, and Franki (Alex) Kempston of Jordan, MN; and 7 great-grandchildren: Taylor and Ben Claassen, Theo and Penny Pike, and Hadley, Sawyer, and Bella Kempston. From Bike’s family she is survived by in-laws: Edith Housenga of Thousand Oaks, CA, Alice Gray of Lebanon, OR, Marion Hauglid of San Antonio, TX, and Lyle (Judy) Beiswenger of Grand Forks, ND; several special nieces and nephews; and many friends.

In addition to Bike, her beloved husband and best friend of 26 years, Hank was preceded in death by her parents, Frank and Rosa DeBoer; brother and sister-in-law, Bill and Marian DeBoer; nephew, Mikey DeBoer; and from Bike’s side of the family, parents-in-law, Bill and Ida Beiswenger; and brothers-in-law and sisters-in-law: Luella and Bob Clarkson, Earl and Ann Beiswenger, Dorothy Beiswenger, Allen Housenga, Dale Gray, and Dennis Hauglid. Blessed be the memory of Henrietta “Hank” Beiswenger.

The funeral service honoring Hank’s life will be held at 2:00 p.m., Thursday, August 18, 2022, at Our Savior’s Lutheran Church in Crookston, MN, with The Rev. Steve Bohler, officiating. Visitation will be for one hour prior to the service. The funeral will be livestreamed by going to the Henrietta Beiswenger obituary page at www.stenshoelhouske.com and clicking on the prompt to view. Burial will take place in the Oakdale Cemetery, Crookston.

Memorials may be given in Hank’s name to the RiverView Foundation, Villa Foundation, Special Olympics, or the Humane Society.

Messages of condolence may be offered to the family at www.stenshoelhouske.com

To order memorial trees or send flowers to the family in memory of Henrietta Jeannette "Hank" Beiswenger, please visit our flower store.