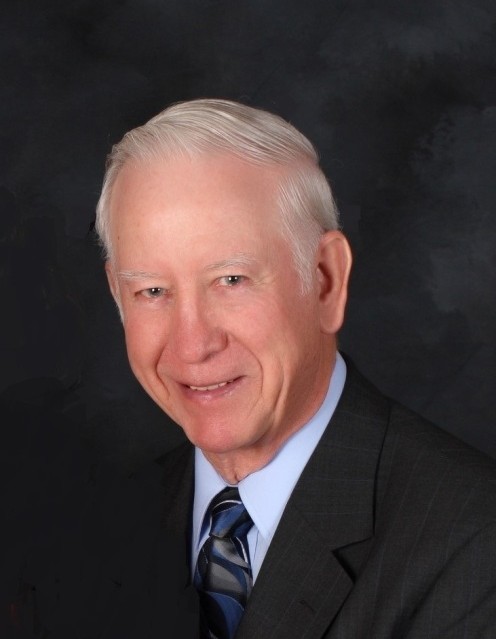 Harvey F. Windels, 86, of Crookston, MN, passed away early Monday morning, March 25, 2019, at Altru Hospital in Grand Forks, ND, with his loving family at his side.

Harvey was born January 23, 1933 in Blowers Township, near Sebeka, MN, to Harry C. and Esther (Limanen) Windels. He grew up with his four siblings on the family farm, was baptized and confirmed in the Lutheran faith, and attended country school thru the 8th grade.   Blessed to be part of a musical family, Harvey played accordion in the Windels Brothers Band, along with brother Clyde on saxophone and Dad Harry on violin.  They played good old-time music for countless barn and wedding dances throughout the area.

Harvey graduated as class valedictorian from Sebeka High School in 1951.  That fall, he enrolled in the College of Agriculture on the St Paul Campus of the University of Minnesota.  While an undergrad, he sang with the Lutheran Student Choir, and joined the Independent Men’s Co-op (IMC) where he formed many lifelong friendships. He earned his B.S. degree in Dairy Science in 1955. Harvey enlisted in the US Army in February of 1956, serving as a Medic during the two years he was stationed in Germany. Following his honorable discharge in February 1958, he returned to the U of M to begin graduate school. While attending a college dance, a young coed by the name of Jeannine Anne Engler caught his eye. On June 20, 1959, Harvey and Jeannine were united in marriage at Randolph Baptist Church in Randolph, MN. Their union was blessed by the births of six sons: Bob, John, Paul, Gary, Mark, and Steve.  During the years “the boys” were growing up, Harvey and Jeannine enjoyed dancing to old-time waltzes, polkas, and schottisches as often as possible.   The “Blue Skirt Waltz” was their favorite and they were often referred to as the “Waltzing Windels” for their prowess on the dance floor.

After completing a Ph.D. in Animal Science in September 1964, Dr. Harvey F. Windels accepted a position with the U of M Northwest Experiment Station in Crookston.  As an Animal Scientist, his career focused on beef and sheep research.  He also taught classes at the NW School of Agriculture from 1964-1968, and in the early years of the new U of M Technical College. Harvey retired in July 1995 after 31 years of dedicated service to the University.

Harvey enjoyed hunting and fishing, including five “Once in a Lifetime Fishing Trips” to Nueltin Lake in northern Canada, and elk hunting in Montana.   His weed-free garden was the envy of the neighborhood, with perfectly straight rows of vegetables and flowers. He was especially proud of the tomatoes he grew and delighted in giving many away to friends.  Harvey started his apple orchard, including two Honeycrisp trees, after retirement; a bountiful apple crop provided another opportunity to share the wealth.

He was an avid birdwatcher, keeping detailed notes on the birds attracted to his backyard feeders. Harvey closely studied the stock market - though not really a money maker, it was a way for him to continue his scientific research of the world around him.   He was an avid Minnesota Twins fan, rarely missing a televised broadcast and keeping his own stat sheet.

Harvey looked forward to holiday family gatherings and reunions with his Sebeka and IMC classmates. He accompanied Jeannine on many of her trips as Lions District Governor in 2009-2010.  And even after hip trouble and advancing age slowed him down, he diligently planted, harvested, mowed, cleared snow, and climbed a ladder after winter storms to rake his roof (often to the consternation of concerned neighbors). In the words of many who knew him, Harvey was “a good man”.

Harvey is survived by Jeannine, his beloved wife of nearly 60 years; their six sons and spouses: Bob and Abbie Albitz, of Plymouth, John and Lori, of New Brighton, Paul and Kathy, of Eagan, Gary of Plymouth, Mark of Elk River, and Steve and Jenn, of International Falls, all in Minnesota.   Also 14 grandchildren: Laura, Jonathan, and Katie Windels, Paige (Shawn) Chambers, Chris Dale, and Andy, Natalie, Elena, Tom, Alex, Jason, Catherine, Anna, and Ellen Windels. Harvey also leaves to mourn his passing three sisters: Alice Schoon of Sebeka, Martha Renneberg of Menahga, and Pearl Koskela of Embarrass, Minnesota; along with many nieces, nephews, other relatives, and friends. He was preceded in death by his parents, Harry and Esther; brother, Clyde; and daughter-in-law, Nancy Windels. May Harvey’s memory be forever treasured.

A memorial service for Harvey will be held at 11:00 am, Saturday, April 6, 2019, at Trinity Lutheran Church in Crookston, MN with Pastor Greg Isaacson officiating. Military Honors will be provided by the Crookston Veterans Council and the Minnesota National Guard Honors Team of Moorhead, MN. Visitation with the family will be at the Stenshoel-Houske Funeral Home on Friday, April 5th, from 5-7:00 pm, with a 7:00 pm prayer service and sharing of memories. Visitation will continue at the church on Saturday for one hour prior to the service. Inurnment will take place in the Oakdale Cemetery, Crookston, at a later date. In lieu of flowers, memorials may directed to the “Dr. Harvey and Jeannine Windels Scholarship Fund” at UMC, payable to the University of Minnesota Foundation.

To order memorial trees or send flowers to the family in memory of Harvey Windels, please visit our flower store.