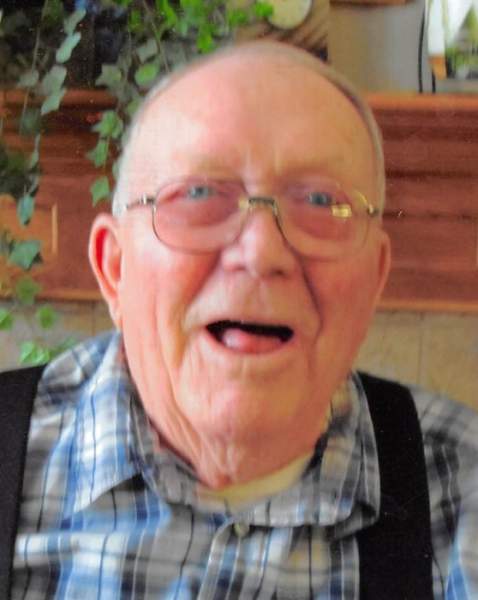 Harvey A. Straw, 96, a longtime Crookston MN resident and businessman, passed away early Friday morning, July 5, 2019, at the RiverView Care Center in Crookston, with family at his side.

Harvey was born in Forsyth, Montana, on March 14, 1923, to William Roy and Gertrude Marie (Johnson) Straw. Harvey was raised in Forsyth, MT, along with his brother, William “Bill” and sister, Myrtle.  He graduated from Forsyth High School and went on to make his career in the retail grocery business.  Harvey met his beloved wife of 58 years, Darleen, in Riverdale, ND, and they were married on July 3, 1952.  The couple lived in Riverdale, Fargo/Moorhead, Detroit Lakes, East Grand Forks, and Grand Forks.

The Straw family moved to Crookston in 1968, where Harvey managed the Red Owl grocery store.  He went on to purchase a neighborhood grocery store in the Sampson Addition of Crookston in 1976 and ran it as “Harvey’s Market”. He was joined in the operation of the store by wife Darleen, their eldest son, Lee, and the rest of the family until 1997. In retirement the couple made his home at Erskine.

Harvey loved life, the grocery business, his wife, children, grandchildren, friends, and people in general.  He was a friend to everyone, and a stranger to none.  His hobbies included playing cards, telling jokes, fishing, hunting, and golfing.  Harvey loved his family and his Montana roots, but was proud to call Minnesota home.

Harvey was preceded in death by his parents; wife, Darleen, who passed away in 2010; brother, William “Bill” Straw; and sister, Myrtle Bay; as well as several aunts, uncles and cousins.

A memorial service for Harvey Straw was held at 2PM, Saturday, July 13, 2019, at the Stenshoel-Houske Funeral Home in Crookston with Deacon Dennis Bivens as homilist.

To order memorial trees or send flowers to the family in memory of Harvey Straw, please visit our flower store.