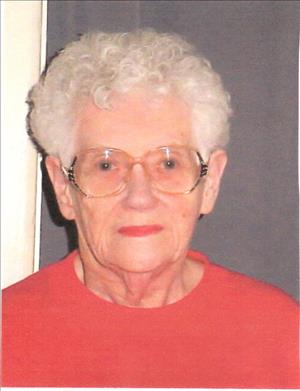 Harriet Mary Bennen, 91, passed away from natural causes at Riverview Hospital in Crookston, MN on March 08, 2016 with her son and daughter by her side. Harriet was born on December 02, 1924 in Minneapolis, MN to William Herr and Mary (Kluckas) Herr. She grew up and attended school in Bemidji, MN. Harriet married Casper Urdahl on July 03, 1945. They made their home in Crookston, MN. Casper passed away in May 1975. She worked at various business's in Crookston including Planetarium Cleaners, Dahlgren Sunflower Co., and Devon's clothing store. She married Edward Bennen on June19, 1976 and they made their home in Crookston. Edward died September 04, 1992. Harriet was a member of Our Savior's Lutheran Church in Crookston. Harriet enjoyed being around her grandchildren. She loved being around children and became a Foster Grand Parent for many years. She looked forward to going to the schools and helping the teachers and the young students. They looked for her to enter the classroom each day and were happy when she walk through the door. She enjoyed going to the lake cabin at Lake of the Woods and spending the week-ends there. She also enjoyed traveling to visit relatives and seeing new sites. To order memorial trees or send flowers to the family in memory of Harriet Bennen, please visit our flower store.