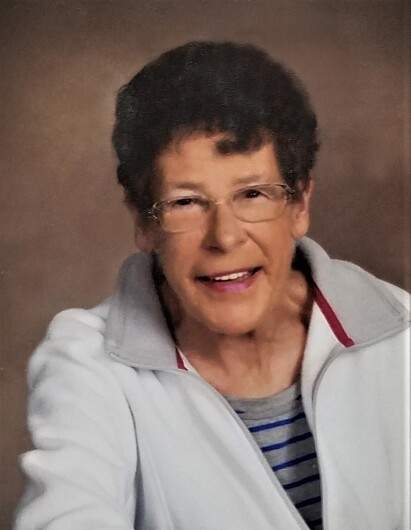 Gloria Jean Staehnke, age 78, of Erskine, MN, passed away Sunday, December 27, 2020, in the Medical City Alliance Hospital in Ft. Worth, TX. She had been in Texas visiting her daughter, Brenda Cole. While in ill-health for several years she never let it defeat her spirit.

Gloria was born in Forest Lake, MN on August 30, 1942, the daughter of Gustaf and Lilly (Trane) Nelson. She was baptized in the Faith Lutheran Church in Forest Lake and moved with her family to Karlstad, MN in 1946, where she was confirmed at the Bethel Lutheran Church. Gloria was a graduate of Karlstad High School with the Class of 1960. On October 22, 1960 she became twice blessed, not only marrying the love of her life, but her best friend as well, Donald Robert Staehnke. After the ceremony at Bethel Lutheran Church Gloria and Don made their home in Stephen, MN until moving to Crookston in 1969. Wife, mother of 4, and homemaker were the roles that kept Gloria extremely busy during those early years. She later began working fall harvest campaigns at American Crystal in Crookston with her best friend, Mona Olson. Later, and for several years, Gloria was employed with the Central High School lunch program.

Gloria and Don were members of the Trinity Lutheran Church where she taught Sunday school and participated in in WELCA. Following Don’s retirement in 1995 from managing the Crookston Co-op Elevator, Don and Gloria moved to their lake home on Union Lake, near Erskine, MN and became actively involved in Grace Lutheran Church at Erskine. As always, Gloria’s life revolved around her family and her favorite job of all was “Head Babysitter” and her favorite title, bestowed on her by her grandkids was “Best damn French toast maker!” Ever! She loved baking, cooking, and hosting family dinners and friends and guests were always warmly welcomed to her home. Throughout her life not only was she Mom to her kids and grandkids, but to all their friends as well. Her laugh was contagious and her sense of humor a treasure. Gloria was a member of the Winger Lions Club and Crookston Eagles Aerie Auxiliary. She also volunteered her time for many years to Villa St. Vincent and the Meals on Wheels programs of Crookston and Erskine.

As the years went by Don’s health began to fail and Gloria became his main caregiver. Together they would reminisce over wonderful memories of their younger years when they danced so beautifully together, the joys (and trials) of raising their 4 kids, and the pride they shared for the wonderful families that each one of the kids gave them. Sadly, Don passed away on August 7, 2014. Gloria’s family finds comfort in the knowledge that a loving God has brought her to her heavenly home and that Mom and Dad are together again. The legacy she leaves to her children is to love one another unconditionally.

In addition of Don, her beloved husband of 54 years, Gloria is preceded in death by her parents, Gustaf and Lilly Nelson; son-in-law, Brent Waxler; 2 grandchildren; and sisters-in-law and brothers-in-law: Priscilla Nelson, Kathy Nelson, Elaine Lange, and Gloria and Manley “Spike” Gustafson; and Clarence Ellis. Treasured be the memory of Gloria Jean Staehnke.

A Memorial Service celebrating the life of Gloria Staehnke will be held at 11:00 a.m., Saturday, May 1, 2021, in the Grace Lutheran Church in Erskine, MN with Pastor Tsena Dinssa, officiating. Visitation with the family will begin at 10:00 a.m. Masks will be required and social distancing will be observed The service will also be live-streamed at that time and may be viewed by logging on to www.stenshoelhouske.com, going to Gloria’s obituary, and clicking on the view service prompt. Inurnment will follow in the Fairview Cemetery, rural Erskine. Please keep the Staehnke family in your prayers.

To order memorial trees or send flowers to the family in memory of Gloria Staehnke, please visit our flower store.