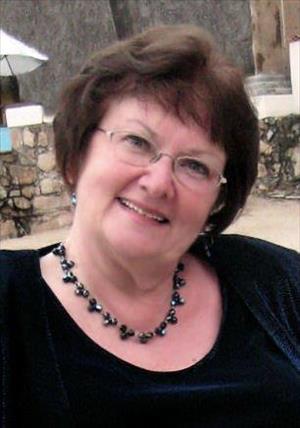 Gladys Mary Thorp, 72, of Crookston, MN, died at her home Friday afternoon in the arms of her loving husband, Bill. She had been fearlessly battling cancer for more than a decade. Born May 19, 1942 in Ada, MN to Albert and Josephine (Boutain) Brantl, Gladys graduated from Ada High School in 1960 and then attended St.Francis School of Nursing in Crookston. Upon earning her LPN degree, she was employed as a nurse at St.Francis Hospital. On June 28, 1963, she was united in marriage to William "Bill" Thorp at St. Joseph Catholic Church in Ada. She continued to work at St.Francis until her children were born, and then joined Northern Paving/J & S Gravel (later becoming Anderson Paving) as the office manager, a position she held for more than 30 years. Following retirement, she volunteered her time to the American Legion Auxiliary (past president), Crookston Library Board and as a local election judge. Gladys could be summed up in one word: selfless. This shone through in her long battle with cancer. Though her illness was serious and often trying, she never once complained about her plight, yet was always concerned about the well-being of others. She loved life and all living things, particularly enjoying gardening, bird watching, planting trees and rescuing the occasional stray cat. Other passions included cooking, reading, knitting, crocheting, watching old movies and discussing politics. She was happiest seated in her three-season room with a crossword puzzle in hand, surrounded by family and the sights and sounds of nature. Gladys is survived by her husband, Bill; their two sons, David (Sheila) Thorp of Parker, CO and Jonathan (Jennifer) Thorp of Fargo, ND; four grandchildren: Zachary, Alex, Cecelia and Milo; sisters Alice Wagner of Ada and Rose (Jim) Bredman of Crookston; brothers Mike Brantl of Minneapolis, MN and John (Brenda) Brantl of Palm Desert, CA; sisters-in-law: Victoria Thorp of Crookston, Theresa Brantl of Breckenridge, MN and Sharon (Bill) Ofstedahl of Walker, MN; and many nieces, nephews, cousins and other relatives. She was preceded in death by her parents, Albert and Josephine Brantl; brothers, Norman and Paul Brantl; brother-in-law, Richard Wagner; parents-in-law, Harry and Lucille (Lalonde) Thorp; sister-in-law, Marlys (Thorp) Beauchamp; and brother-in-law, John Beauchamp. A memorial service celebrating the life of Gladys Thorp will be held at 2:00 p.m., Monday, May 11, 2015, at the Stenshoel-Houske Funeral Home in Crookston with The Rev. Jo Gast, presiding, and The American Legion Auxiliary, participating. Visitation with the family will be for one hour prior to the service. Memorials may be given in Gladys' name to the Crookston Altru Clinic Infusion Center. Online registry:

To order memorial trees or send flowers to the family in memory of Gladys Thorp, please visit our flower store.