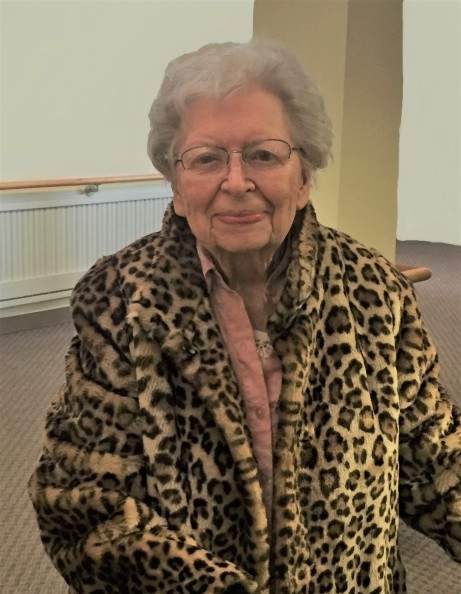 Georgia Houske, 94, of Crookston, MN, passed away Saturday evening, November 3, 2018, at the Villa St. Vincent in Crookston. Georgia Beatrice Carlson, daughter of Taylor and Clara (Neprud) Carlson, was born in Crookston, Minnesota on May 26, 1924. She was baptized and confirmed in the Lutheran Church and grew up in Shelly, Minnesota.

In 1946, Georgia married Morris Sherman Haugo, a Shelly, Minnesota native, who had recently returned from Japan, where he had been a POW for four years. Georgia and Morris lived in several places where Morris was stationed until his retirement from the U.S. Marine Corps. They then settled in Jacksonville, N.C. with their three children. Morris died in 1961. Georgia taught piano lessons at the Clyde A. Erwin Elementary School for a time following his death. She later moved with her family to Moorhead, Minnesota and worked at the Armed Forces Examining and Entrance Station in Fargo, N.D. for several years.

In 1966, Georgia married Glenn Houske and moved her family to Crookston, Minnesota, where she worked with Glenn at the Houske Funeral Home for many years. As a devoted member of Trinity Lutheran Church, Georgia was involved in many projects. One of her proudest accomplishments was compiling a cookbook that benefited these projects. She was a member of WELCA and served as its president. Georgia also belonged to Chapter AX of the Sisterhood of P.E.O and was a member of the Agassiz Study Club and the Riverview Health Care Auxiliary. She loved entertaining and playing the piano. Georgia and Glenn moved to Mesa, AZ following Glenn's retirement in 1996 where they were active in St. Peter's Lutheran Church and both sang with the church choir. Glenn passed away in 2008.

The funeral service for Georgia Houske will be held at 10:30 am, Friday, November 16, 2018, at the Trinity Lutheran Church in Crookston with The Rev. Greg Isaacson, officiating. Visitation will be at the Stenshoel-Houske Funeral Home on Thursday from 5-7:00pm, with a 7:00pm prayer service, and will continue at Trinity for one hour prior to the funeral on Friday. Interment will follow in the Oakdale Cemetery in Crookston.

To order memorial trees or send flowers to the family in memory of Georgia Houske, please visit our flower store.