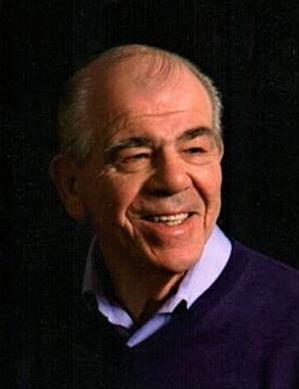 Frank Michael Barnes, 78, died Saturday, May 13th, at Altru Hospital in Grand Forks surrounded by family. He lost his battle against lymphoma.

In 1959 he married Diane (Carmen Diane) O'Neil and they were blessed with three children; Steve, Tony, and Katie. Frank worked for the JCPenney Company in various management positions in Seattle, WA, Wolf Point, MT, and Havre, MT. Through the years he coached both Little League and Babe Ruth baseball, started a soccer league for boys and girls in Port Orchard, WA, and did volunteer work for the Seattle World's Fair and United Way. Frank served as treasurer of the Kitsap Pee Wee league, was a member of the Wolf Point City Business Assoc., coached the American Legion baseball team in Wolf Point, was president of the Havre shopping mall board, and served on the Chamber of Commerce. Sadly, Diane died of cancer after 27 years of marriage. Frank married Sharon (Johnson) Remick in 1986 and gained two stepsons, Leigh and Jeff. After retirement they moved to Minnesota to live at Maple Lake and later moved into Crookston. They enjoyed 20 years together before Sharon died of cancer. In 2007 Frank married Kathie (Petersen) Carlson and gained three more children; Brian, Lori, and Jana. He enjoyed many travels across the United States, Hawaii, and a trip to Scandinavia. Frank was a man of great faith and was actively involved in any church to which he belonged. He touched many lives with his love and kindness. In return he was loved by many and will be so deeply missed.

To order memorial trees or send flowers to the family in memory of Frank Barnes, please visit our flower store.